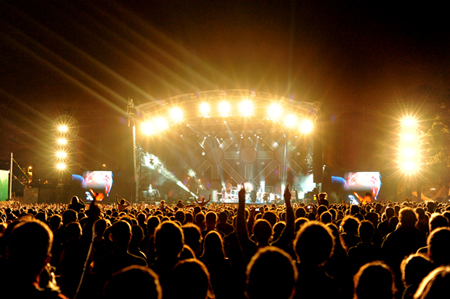 Hello and welcome to another edition of French Music Monday! Here at My French Life™ we’re all about helping you get through a Monday by bringing you some sweet sounds for your listening pleasure. This week, we’re talking summer festivals in France.

In France, the summer ends and the last rays of sun sound the death knell of popular festivals. ‘Rock en Seine’, ‘Solidays’ or ‘Vieilles Charrues’ invite festival goers to come back next year. But never fear! The nostalgic may dry their tears, we’ve made a list of the best bands who took over the French summer festivals in 2012!

Let’s begin with the northern French group Shaka Ponk, who took over the biggest festivals scenes with 26 concerts. In less than a year, the band has matured and are electric in live performance. The hurricane that is Shaka Ponk shakes and brings some dazzling French rock. Accompanied by their famous mascot Goz, an old monkey who appears in every one of their video clips, the 6 members of the band mix crazy videos with a volcanic show. A zen spirit in a punk culture.

The french members of Dionysos know how to conquer crowds thanks to their extravagant and ever-shifting universe. Take Mathias Malzieu, the charismatic singer who never hesitates to dive topless into the crowd at the end of each concert. These musicians play like it was their last gig and give absolutely everything they have. Originally from Valence, Dionysos (named for the Greek god of wine and theater) plays a happy mess and prove the Olympic form of French rock. In 2012, the band released their 7th album named ‘Bird’n’Roll’, with a sound reminiscent of the fifties.

Revelation made in France, this quartet of DJs seems to belong to turntables as much as Zidane belongs to a soccer ball. Four time ‘Disco Mix Club’ world champion, C2C gives remarkable stage performances and creates a very intense atmosphere. With the first album ‘Tetra’, released in September, this promising band seduce French youth. Formed in 1998 in Nantes by two members of ‘Hocus Pocus’ and two DJs of ‘Beat Torrent’, their mastered flow illuminates with jazz, soul and hip hop.

Voted best band in 2011 by the French radio ‘Skyrock’, 1995 is currently the most bankable hip hop collective. Meant to pronounced “Un-Neuf-Neuf-Cinq”, these Parisians rappers arrive with their retro and uninhibited style. Their name refears to one of the golden years of old school hip hop. The five MCs and their DJ revive French rap with a sound of cheeky nonchalance. Full of zest and ardor, that’s for sure. We haven’t heard the last of them.

Festivals foster the emergence of great discoveries such as Hyphen Hyphen. These four students from Nice get you with their fresh and biting groove: a slap that wakes you up and brings you into a liberating trance. Indefinable, these magicians draw their influences from the side of bands like ‘Phoenix’, ‘Klaxons’ or ‘Metronomy’. The charm of Santa, the singer, and the stunning energy of the whole band make Hyphen Hyphen one of the best scenic surprises of the year!

Did you go to any of the festivals this year? What did you think of them?