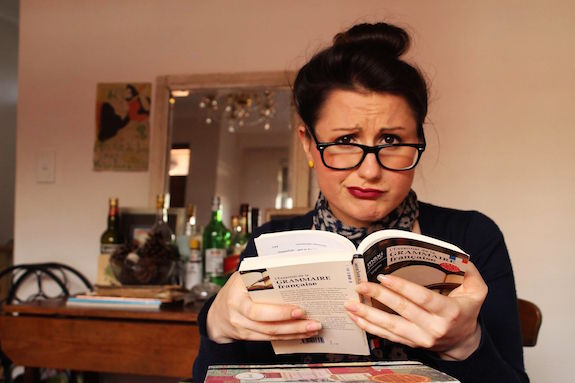 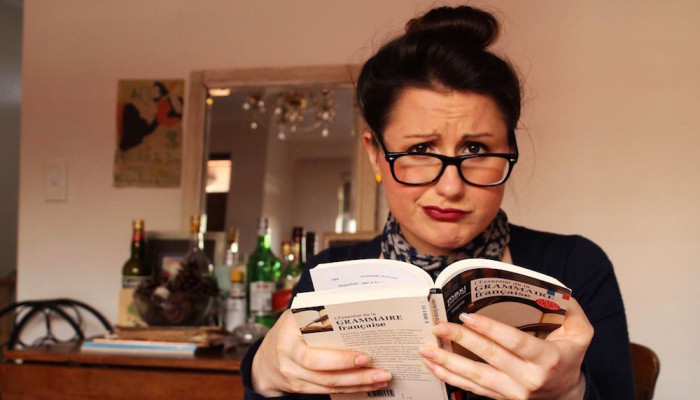 It only took one trip to Paris to make a raging Francophile out of Australian comedian Jacqueline Mifsud.

“I worked in TV in Melbourne and I wanted to move overseas and live in London,” she says. “Then I ended up meeting a friend who was travelling around – she lived in Paris – and that’s why I went there. I thought, this feels right.

“It was more of a challenge in France: the language, the culture, everything about it. I fell in love with it and ended up staying for just over four years. This will be my third year back and I’m still completely lost.”

The Francophile comedian finished a hilarious stint at the Melbourne International Comedy Festival a few months ago with her aptly titled show, ‘The Anglophone and Other Offensive Instruments’. I sat down with her to talk about life as a tour guide in Paris, how she keeps up with her French, and the culture shock of returning home.

What are the things you loved about Paris and made you a Francophile?

The day-to-day life. I’m trying not to say joie de vivre but whatever. Just the café culture, the brasseries: you just go, have a glass of wine, and there’d always be good food options. You’d always have salmon and some beans – that was great. You just sit there and chat and talk and maybe have 1000 cigarettes. I loved that sort of thing. It was so social. So that’s why I get a bit lost here, it doesn’t seem to be the same thing. 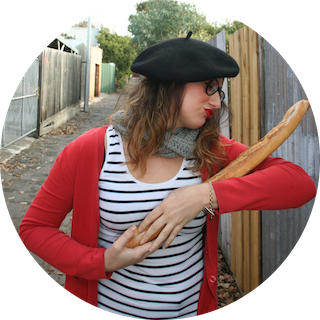 And the cinema – the card you can get for 20 euros to see as many movies as possible! They really have an emphasis on culture there. And learning French was good, slash the most difficult thing.

What do you miss from Paris?

The little things. I miss French bread. The cheese – yes, definitely the cheese. Cheese is expensive here. People eat cheese with crackers here. You’re not meant to do that. It’s illegal.

You have your fresh food, you don’t have frozen stuff, and everything’s affordable. It’s cheaper and healthier in Paris to have salads and things. I wouldn’t pay more than 13 euros for a good meal, a steak would be about 17 euros, and you’d get a little menu for 20.

My favourite place in the world here, which makes me think of Paris, is La Niche on Smith St. They’re just the most lovely people. That attitude of a sing-songy vibe, that to me is Paris. That’s what I miss, that sort of culture.

I love the traditions as well. In Easter, they have the bells with the wings on them. When Jesus died they stopped the bells ringing and then when he came to life he grew wings and flew from Rome.

That attitude of a sing-songy vibe, that to me is Paris

April Fools’ day, they stick paper fish to your back. The galette de roi, you’d choke on a piece of stone. It’s awesome! We don’t have anything like that. I was so jealous of everything. We’re just winging it in Australia. You have cultural things that matter. We understand the way they are because of that.

How was your experience with the language?

I learnt French in high school [but] I was very self-conscious. There’s a difference between saying ‘Oh you made a mistake, that’s really funny, this is the correct way to say it’ and just laughing at me. No, I don’t need your help to feel stupid. I do that by myself thank you.

I took lessons at a little place near the Arc de Triomphe called France Langue – French Tongue. That was pretty good. I did two three-month intensive courses at France Langue, 19 hours a week, so that’s why I’ve got any sort of level. My ex-boyfriend would teach me useless phrases. Just teach me a phrase a day, I’d say. Say this: “je suis une sorcière”. Thanks!

And you worked as a tour guide in Paris?

The only jobs you could do as an Anglophone would be nannying, work at a bar, or a tour guide. It was great, because that’s my comedy performing skill.

I had to learn the entire history. I didn’t know a thing but I had to for the job. I loved it – loved performing to the tourists, loved teaching them about French culture, seeing the real Paris.

You had a set structure of stops, then you went on another tour and they would teach you, then you would make it your own. And then I was like, but what else happened? Then I was doing tours of Versailles and of the Eiffel Tower as well. It was amazing.

Didn’t have a fear of heights?

No! I miss it and I miss that lifestyle being 23…4… 5… 6… 7  – having all your tour guide mates. It’s a real fantasyland because no one had family there. It was just us having a tour, getting whatever tips we could and just sitting near the Seine having a picnic all day, all night.

Did you have a reverse culture shock when you came back?

I had an almost breakdown! No, that’s just a regular Tuesday for me.

My parents live in the suburbs and I used to have a car but I had a really small accident so I used that money to go overseas [instead]. I went from living in the centre of Paris where transport is just so incredible, so affordable, so efficient, and then going back to my Mum and Dad’s in the suburbs where you can’t go anywhere. Ten minute walk to a bus, 20-minute wait for a bus, an hour ride to anywhere.

I miss not being able to speak French with many people as well. Not being special. “Ah, you have an accent, where are you from?” I’m from Australia! Here, no one gives a shit.

How do you keep up your French? 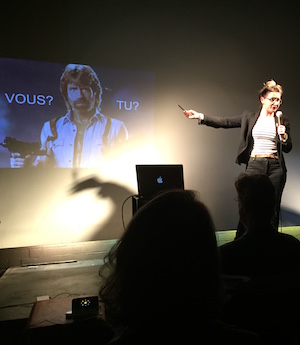 I’m actually looking at enrolling in French lessons again. I have a few books and I used to be pretty strict on reading through things. I’m good, I can speak French, but I make errors all the time and I speak franglais far too much. I’ll still try and have a conversation with myself not to lose it.

My French is from the banlieues, the real street French. I made friends with [people who] weren’t speaking perfect French either, so I was making fun of them and that’s how I picked up all that stuff that they wouldn’t teach in textbooks!

What do you think is the biggest misconception about France?

I think it’s the perception of French culture, much like over there. Everyone thinks we wear cork hats and ride on kangaroos. I just entertain that: yep, kangaroos everywhere, can’t get a foot in. Whereas here they say, “oh if you want to promote your French show, just hold a baguette and wear a beret and ride around on a bicycle”. That’s borderline racist.

That [the French] drink a lot, too, that’s a huge one. You always learn how to respect drink and food. You know how the French never get fat? It’s because they appreciate their food. They don’t go on diets. You have your little dessert and you appreciate it.

And when you have a glass of wine you don’t say, “oh I’m getting pissed”, you say, “taste this fruity bouquet”! You really appreciate what you have. Respecting it. It’s that relationship with food and drink that they don’t overindulge. Meal sizes are smaller. ‘Where’s the rest of my food?’ Well that’s probably how much you should be eating. But we’re just used to it. It just gets bigger and bigger. Everything’s like Smorgy’s.

You know how the French never get fat? It’s because they appreciate their food. They don’t go on diets. You have your little dessert and you appreciate it.

When you go out for a coffee or a meal, it’s about the experience and again the relationship with food. What a lovely meal! We’re talking, we’re sharing, we’re drinking. Whereas here it’s, we’ve eaten, oh we best be going.

Have you got plans to go back?

I’m very lucky that I have a European passport so I can go back whenever – Mum’s from Malta. I think I’d have to go back, even go to New Caledonia, Montreal… 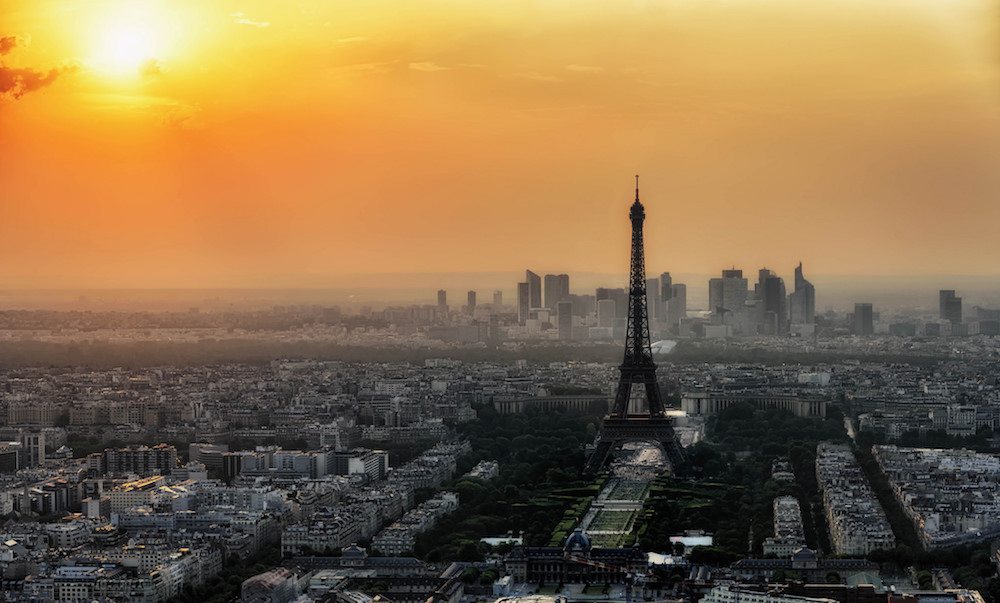 When I get a little bit sooky here when my friends are off doing stuff, having to plan three weeks in advance to literally have a single drink, I think back to my happy place hanging out in Paris. And I’m very proud of that – no one can take that away from me.

I don’t want to be a massive snob, quoi: “I lived in Paris, I speak French, what are you doing? Where do you live? What experience have you had?” But the more you travel, the more you grow your roots.”

Thank you Jacqueline, we can’t wait to hear more about your French adventures!

Have you had a French experience of a lifetime? We can’t wait to hear more! Share your stories with us in the comments below!