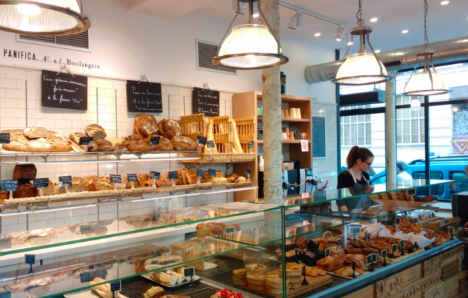 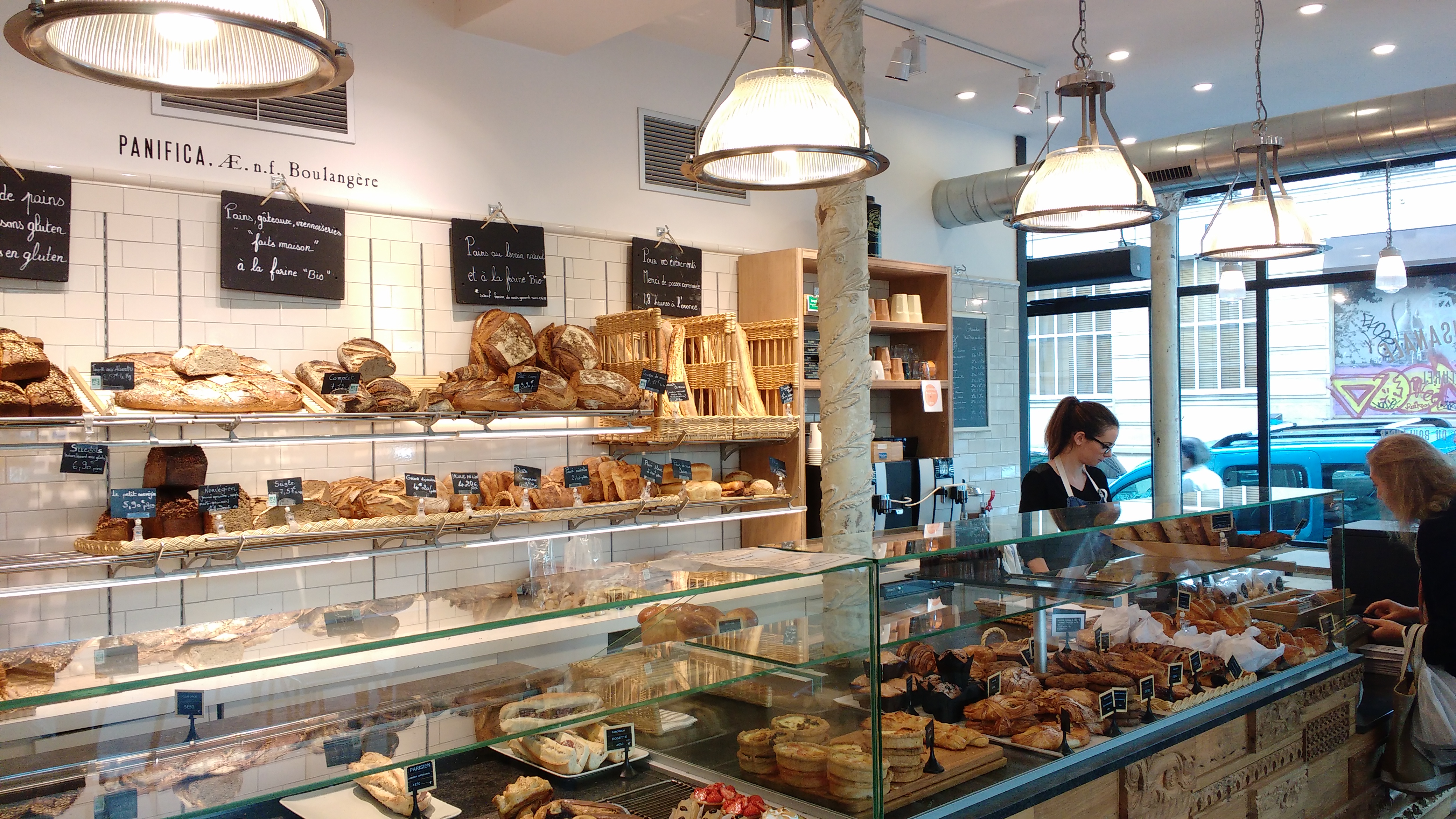 In our view, these small businesses and the passionate people behind them are exactly what give Paris its magic and unique charm: Paris, a mosaic of les fleuristes, boulangeries, patîsseries, fromageries, et bien sûr, les chocolateries.

Welcome to our Paris Mosaic series. 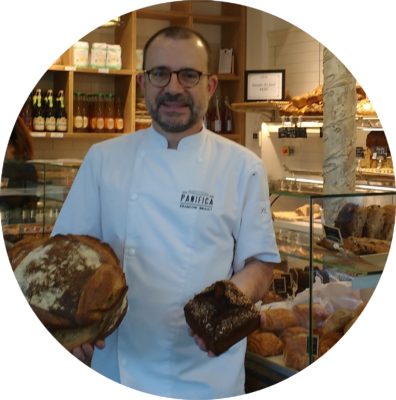 Panifica boulangerie oozes style, proving that modern, minimalist interiors can compete with the flamboyant, traditional bakery aesthetic. And the bread isn’t half bad either!

The name Panifica comes from the Latin for baker. We met François Brault, the owner and ‘panifica’ himself, whose substantial, Scandinavian-style bread have won the approval of food writer David Leibowitz who called them “marvellous”.

All of the products at Panifica are organic and some are made with alternative ingredients to make them low in gluten or gluten-free. This is a bakery that’s committed to high quality.

We spoke to François about the French culinary tradition, changing careers, and being an artisan baker in Paris.

Is this a family business? How long has it operated and how did it begin?

Yes, you could call it a family business if you wanted, but it’s not the best description of Panifica’s creation. I started Panifica with my associate; we began just under four years ago.

But before that, I wasn’t in the baking business at all, I used to work in technology and finance so working in a bakery is totally new for me.

Why did you choose to change your profession?

I reconnected with my family history and found out my family was involved in gastronomy. That’s when I decided to open this bakery. 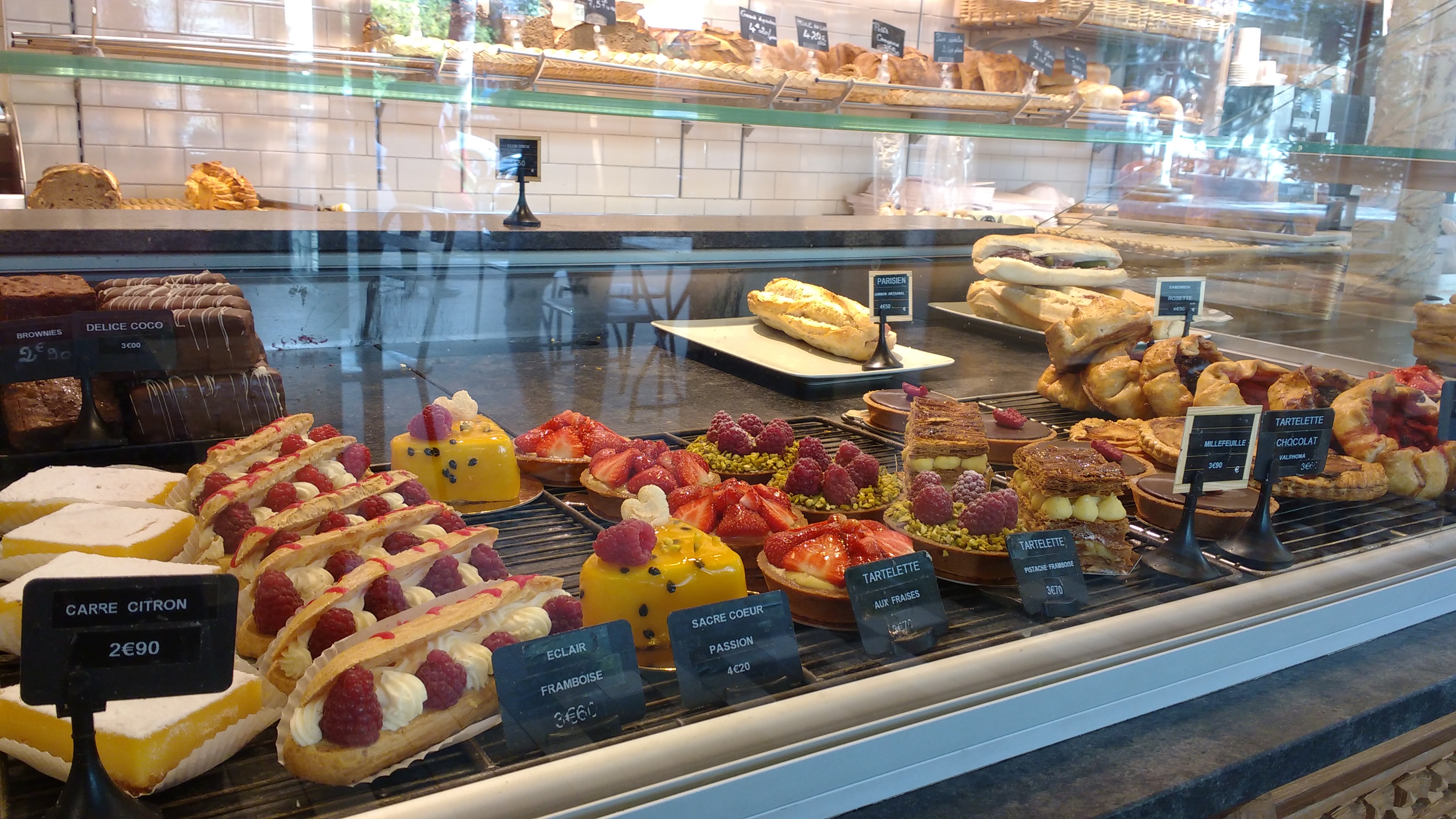 Could you describe a typical day in your bakery?

Here in the bakery, we have a diverse clientele, from schoolchildren who live nearby, to people who come from all over Paris, as well as tourists. In a traditional bakery, not many people come in the morning, most come at midday or in the afternoon. Here we have an almost uninterrupted flow of customers between the opening and closing times.

Myself, I’m busy in the morning with the orders, making deliveries and sorting out any problems which arise – because every day there are new problems. So the morning is more administrative, and the afternoon is when I make the bread.

What qualities does an exceptional baker need to succeed and really excel in this business? 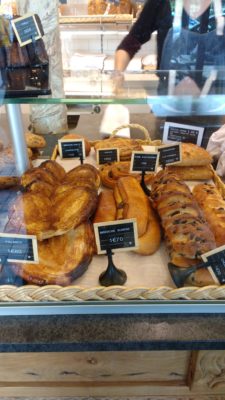 I think you need to be interested in the products and understand them well. It’s a quality that’s necessary for a lot of professions and in most manual jobs.

After that, even the smallest scale bakeries have to know how to run a business, do the books etc., but that’s not limited to bakeries.

So, is it more important to have technical skills or creativity?

I think for the bakery side of it, technical skills are the most important, but perhaps for the snack side of things, it’s creativity.

You’ve definitely got to have a lot of creativity to design the shop itself. Some bakeries call on a company to fit out their interiors but we did it all ourselves.

So yes, it’s definitely important to have creativity when it comes to creating the shop itself.

The decor is quite industrial but mixed with traditional details, would you agree? Is that reflective of the bakery – a mix between tradition and innovation?

Yes exactly that, it’s not a coincidence. It’s a new concept having so much light in here; traditionally, most bakeries go for a more sombre look.

Small businesses selling local, artisan products seems to be an integral part of French identity. A sense of tradition has managed to continue in French communities, more so than in many others around the world – why do you think this is?

Gastronomy is definitely part of French tradition. There have always been great chefs in France. There are lots of countries where this wasn’t possible because of their intemperate climate; they couldn’t have the variety of produce that we see in France.

I don’t know if that’s a sufficient explanation; there are countries that started trading earlier than France did, and had access to spices, exotic fruit and plants, yet they don’t have such a gastronomic culture as France.

But I don’t know why I just know that’s it’s a very old tradition.

For me, it’s a mystery; I’d like to meet someone who knows where it comes from. Certainly, gastronomy is one of the oldest French traditions. 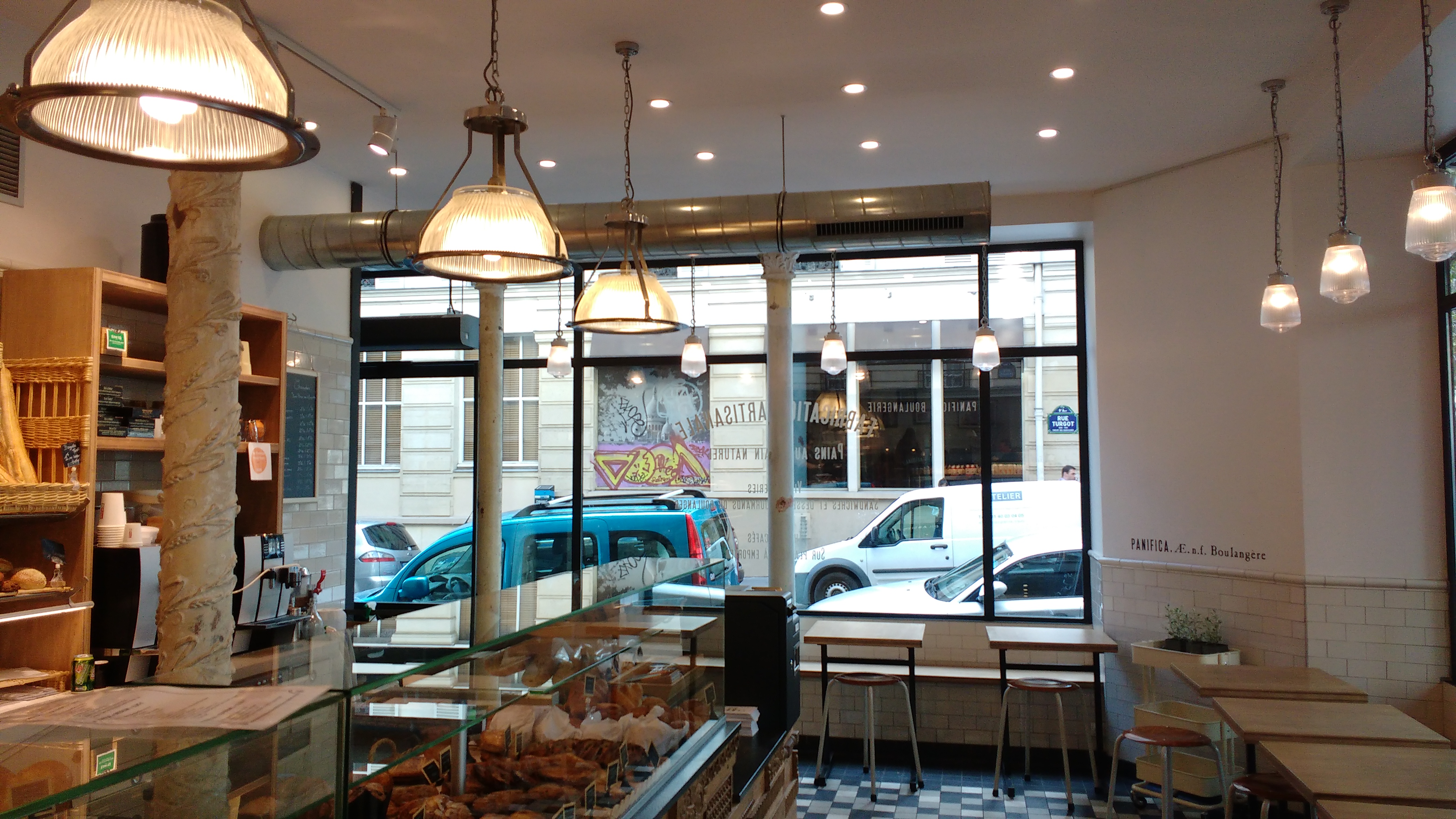 You’ve undertaken some projects with charitable organisations like RECHO –  is engagement with humanitarian causes an important part of Panifica’s values?

We take part in citizen engagement, for example with RECHO, but it’s not a dominant part of our activity, we are still a normal business. It so happens that the value of sharing is linked with bread; in French, we say “copain”, that means the people that we share bread with.

Let’s talk about your products, what are your three most popular products?

We have a range of speciality bread, which our customers really like. In the range we have a grain bread called the ‘Norvégian’ (Norweigan), which is wonderful for breakfast; we have a naturally gluten-free bread that’s very popular as well, it’s called the ‘Suédois’ (Swedish). These are a lot more popular than baguettes here.

We only sell products made on site – this is another challenge – and we have a lot of little desserts, such as a cake called ‘Sacré Coeur’, and a plat du jour that is popular. It’s difficult to single out a flagship product; it’s the whole range that makes up Panifica.

And which product is your favourite?

From the bread, it’s the ‘Suédois’. It’s my favourite because we managed to make a gluten free bread from buckwheat.

As for the desserts, my favourite is the pannacotta with strawberries and rhubarb, it’s the end of the season for rhubarb but it’s my favourite one that we do. 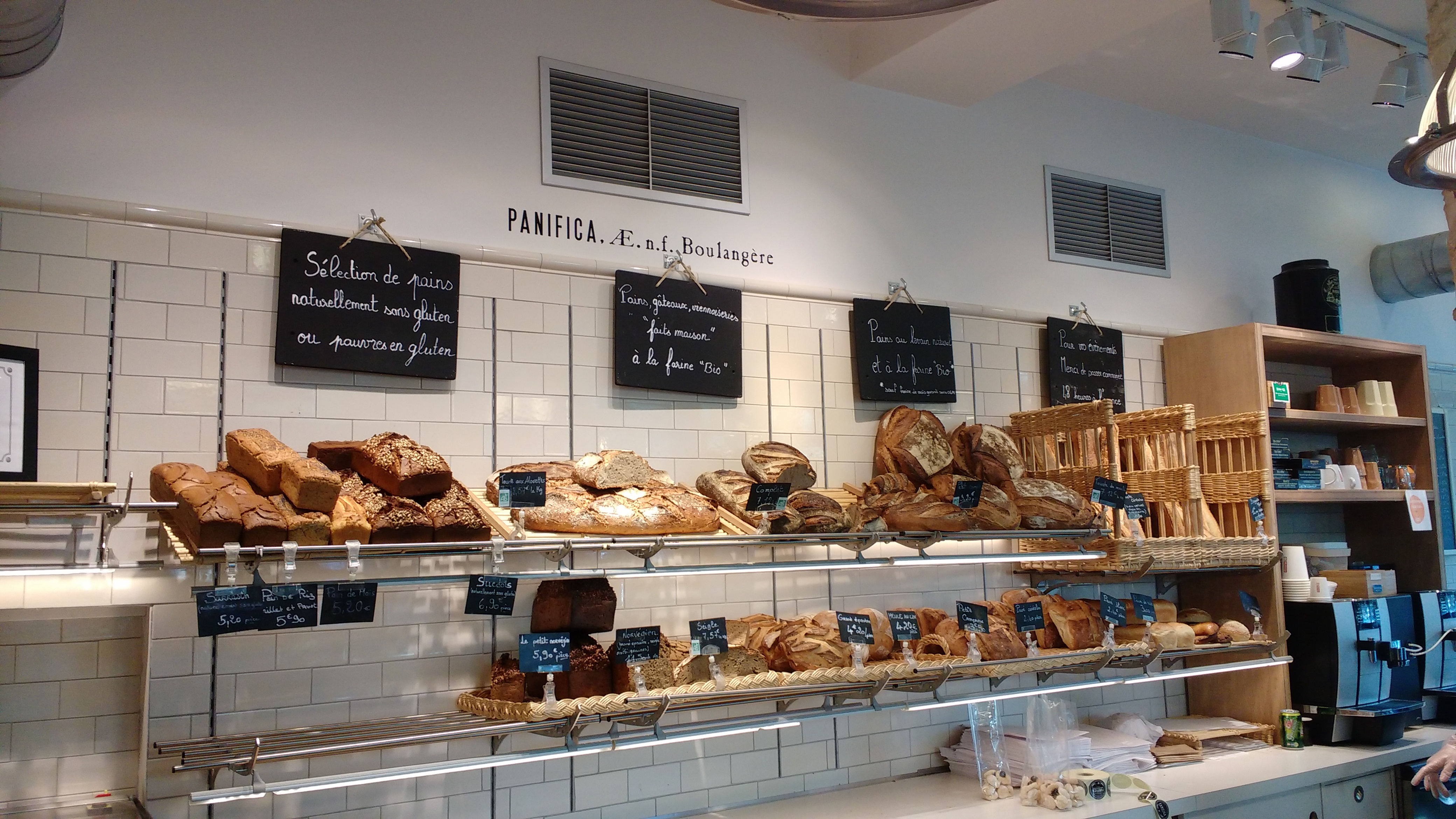 You use a long fermentation for the bread, what’s the importance of this? How does it change the quality of the bread?

It’s completely essential; the primary ingredient of good bread is time above any other ingredient. The second point is that we use natural leaven, which is important to make good bread, both for taste and for your health.

For example, a lot of people have questions about gluten; gluten is not bad, as long as it’s digestible. For easily digestible gluten you should choose levain or sourdough bread.

It’s important to go back to this traditional method rather than using chemicals, which make the bread less good in terms of taste, and also for your body.

At the end of the day, what do you do with the leftovers?

In fact, we have very few leftovers because we calculate how much we’ll need, so we have two or three times less waste than traditional bakeries. We give some to the staff, but unfortunately, we can’t donate outside of the bakery; it’s very difficult to give food to charitable organisations.

Do you have any favourite addresses to share with our members and readers?
To eat:
Jean, 8 rue Saint Lazare, Paris 75009

Are you a fan of more robust Scandinavian-style bread or do you prefer traditional French-style baguettes? Have you ever been to Panifica? Share your experiences with us in the comments.

Acknowledgement:
Interview conducted by Rose Trigg – Intern at MyFrenchLife™- based in Paris
All images © Rose Trigg