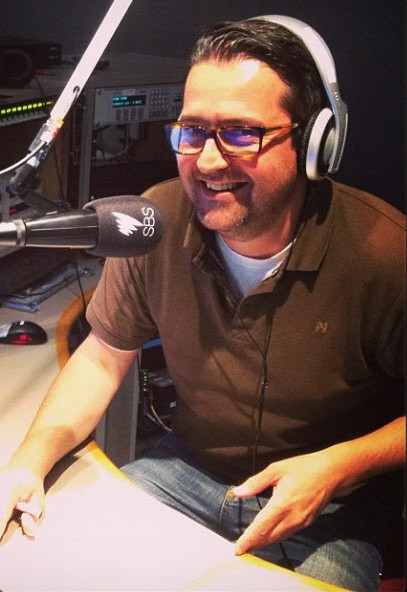 If you identify yourself as a Francophile in Australia, there’s a good chance you’ve heard of the SBS French radio program.

Produced and broadcast by expat Christophe Mallet, the program is cherished by many listeners throughout the Francophone world. The SBS is at the heart of a vibrant community; it has become the pulse of multicultural Melbourne.

When I enter SBS HQ to talk about all things French, Christophe happily takes on his new role as my personal tour guide. As we wander the corridors, Christophe proudly introducing one language hub after another, I can’t help but notice an infectious passion in his voice.

Christophe has been in Australia for ten years, and with SBS French as Executive Producer and Broadcaster since 2011.

With the Francophone world spanning numerous continents, it’s not surprising that he finds the task of tailoring segments to such a diverse audience so difficult. There are expats like Christophe himself, who keep la patrie close to heart; Australian students engaging with a high level of French, and everything in between. He tells me it’s a constant juggling act to keep his listeners happy.

But why are Australians so enticed by French culture? “Some people could argue that people in Australia are craving a certain sophistication and looking for [it] at a time when France meant sophistication,” he says.

That is seen everywhere; in Australia’s fondness and preference for French labels, décor, lifestyle and ideas. The Francophile community grows, and we keep asking for more.

The Alliance Française French Film Festival is one such testament to this growth. The annual event rapidly reels in more and more viewers each season. In its 26th year, a whopping 49 films are being showcased across the country. And it’s a formula that just works, time and time again.

“Even for those non-Francophiles in Australia, many of which would be able to name a French film they have seen,” he says.

And of course, we all have our icons like ‘Paris’, ‘Russian Dolls’ (pictured above) and ‘Amélie’ – Christophe even named his daughter after the latter – to provide us with an idyllic account of the country.

Still, living on the other side of the world hinders the availability and immediacy of current French films, leaving us feeling slightly left out of the loop.

“It’s hard in Australia. It’s hard to keep in touch with what’s happening in France. We are one step behind,” Christophe says. For instance, one of his favourites from this year’s line-up, ‘La Famille Bélier’, has well and truly seen its day in the French theatres.

Why, then, has the French Film Festival powerhouse continued to thrive?

His answer is clear: the cinematic experience. We want to attend the festival. We want complete absorption in a film. We want grounded, humanised stories. We get it all, and more – the full cinema experience.

“Some people could argue that people in Australia are craving a certain sophistication and looking for [it] at a time when France meant sophistication.”

We see French cinema making waves, where actors don’t pigeonhole themselves. They’re diverse and unpredictable, and we’re pleasantly surprised. We see it in the way more French actors are reinventing themselves, making a name for themselves behind the lens as filmmakers.

And the “beauty of the festival”, as Christophe puts it, is that it’s highly unlikely a raging Francophile has seen all 49 films – “so, you can still be surprised.”

Will we see you at the festival?

The Alliance Française French Film Festival 2015 is playing at a number of locations across Australia. For session times and to book online, visit the official website.

Don’t forget to tag us in your photos at the Festival! Melburnians, we’re on Twitter at @MyFrenchMelb or Australia-wide at @MaVieFrançaise.

What do you think of the French film industry? Will you be seeing any films at the Alliance Française French Film Festival? Leave your comments below!