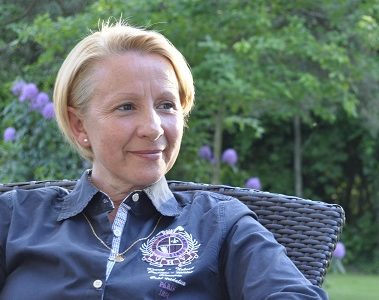 If women today are involved in the equestrian world more and more – whether they’re trainers, owners or breeders – this was far from the case in the 1980s when Catherine Onnée was in her twenties.

Passionate about horses and competitions, Catherine recounts her adventures as a jockey and show jumper.

Catherine Onnée has always had horses around her. At the age of 12 she first competed in show jumping, and at 16 discovered the adrenaline rush of being in the saddle atop a racehorse after her uncle, a trainer, offered to let her try.

She became an amateur jockey while studying simultaneously between 1980 and 1988 – a time when women were not allowed to take up the sport professionally. She was among perhaps a dozen women in horse racing, one of whom was the famous Darie Boutboul1.

“Horses remain man’s most beautiful conquest, an animal that understands us. They’re sponges. They behave differently depending on who is riding them, and they can figure you out in an instant. I’ve ridden plenty of horses, and with some of them it’s like having a Ferrari between your legs!” 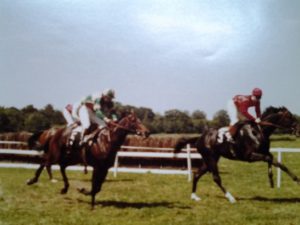 While her friends were going out and dancing, Catherine Onnée practised her sport to the extreme. A tomboy daredevil, she loves speed and finds an incomparable feeling in horse racing – a very technical sport where you need to have a feel for the horse’s movement.

“In the race, it takes concentration. You’re in the moment, everything is decided in a quarter of a second!” One time she fell and spent 48 hours in a coma, her spleen shattered.

“Many people are fearful. I was fearful after my fall for the first three races, but I had a fantastic mare who I wanted to ride… the desire to ride overtook the fear!”

Time passed, and the sport is demanding (a dozen races a year from March to October which require intensive training), which was stopping Catherine Onnée from doing anything else. She justifiably wanted to go sailing and see friends, so she decided to give up racing and go back to other riding competitions, like show jumping.

Then she married and had two children who she put straight in the saddle. Her son, Clément came second in the French championships and her daughter Cécilia, was champion of Brittany, both in show jumping. “An unsporty daughter? Impossible! When it was raining I would tell them it wasn’t that bad and to go out anyway. They tried other sports, but came back to horse riding.”

At 45, Catherine decided to stop competing in show jumping. She had two or three hard falls and has a knee problem; her body is no longer keeping up. She recognises how difficult and demanding a sport, horse riding is, but that it offers so much in return. Her advice is to never give up, be persistent and work in order to live your dream with passion and emotion.

It taught me the value of effort and rigour, and gave me a mental balance; I would say even a mental strength, drawn from deep inside. When you’re feeling low, go for a ride in the forest at dawn just as nature is waking up, gallop, and you’ll dismount feeling revitalised for the whole day!

Today Catherine makes the most of life, aware of what she can do and what would be risky. “Every age has its pleasures, but this sport is in my genes and will always be part of me in one way or another. And who knows, a few years from now I hope to be out on a ride with my grandkids… on a pony!” 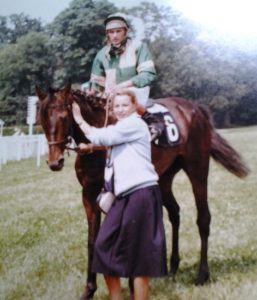 Can you tell us about your career?

I’ve never been a careerist; I always gave priority to my children and my passion for horses. I became a solicitor in 1989, I would have needed to elbow my way in and dedicate myself 300% to progress in that career. I had a house, horses, kids; I chose to work part-time.

It passed without notice and without feeling blue, or any physical symptoms. The most difficult thing has been my children leaving (empty nest syndrome).

What is your favourite outfit?

Jeans, a shirt or t-shirt, a jumper over the shoulder, and medium-sized heels.

What is your morning ritual?

Orange juice and sprawling across the bed.

What book are you currently reading?

Joël Dicker’s ‘The Truth About the Harry Quebert Affair’. 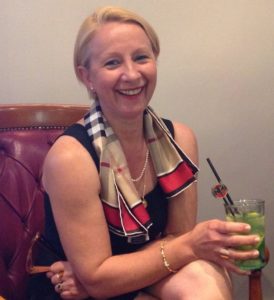 Who are your female role-models?

My mother and grandmother. I lost my mother young and I was raised by my grandmother who never left me and helped me raise my own children when the time came.

Simone Veil or Mother Teresa, women who shook things up.

Do you have a message for your daughter?

We have the strength of will and the power to spread it. A woman can knock down every barrier!

Do you have a special talent?

Do you enjoy horse riding? Or do you have another passion to share? Tell us about your passions in the comments below!

All images © Mid&Plus
Translated by Sophia Marci-Anderson
1Darie Boutboul, born in 1958, was the first French woman to hold an amateur jockey license and to have won a tiercé race (Prix de la Plaisance on Abdonski in 1984 in Longchamp). From then on, women – amateur or professional – had separate races although they are also allowed to ride with the male jockeys. In 2006, at the launch of a circuit reserved for women, 22 professional licenses were issued to women against 26 today (flat and obstacle combined). This remains very few compared to the 639 male jockeys in France.