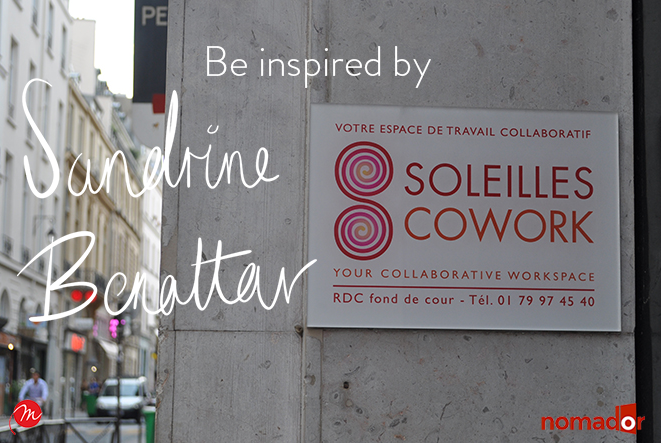 We’re always amazed by the people we meet in France. They’re doing extraordinary things – be it starting companies, creating inspiring art, designing a better world, or simply living out their dreams!

As an online, peer-to-peer website for house-sitters and home-owners, Nomador understands the ups and downs – and huge rewards – of stepping out to do something different. The modern world offers so much possibility for new businesses, initiatives and trends. Although at first glance France might not seem like the centre of innovation, what with their love for tradition, heritage and le patrimoine, there’s a lot happening that might surprise you…

Nomador has a special connection to Soleilles Cowork, a coworking space in the centre of Paris. We met with the founder, Sandrine Benattar to hear the inspiring story of a coworking space especially tailored to women, and the rewards and challenges of entrepreneurship. Come with us – and prepare to be inspired! 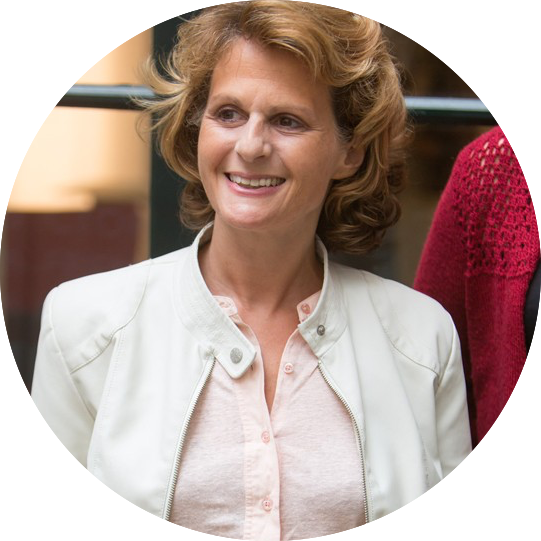 What strikes me about Sandrine Benattar is not how much she fits the picture of a refined, intelligent and successful French woman. Rather, it is her pragmatism; her gentle, yet direct manner, and the fact that she refuses to add complexity to issues that she sees as rather straightforward.

She is one of the founders of Soleilles Cowork. Based on rue Vivienne in the 2nd arrondissement of Paris, it is a modern coworking space.

It was one of the first in Paris when it opened in September 2011, second only to La Cantine (now known as NUMA, based on the rue du Caire). The space received a great deal of media coverage, and the founders were faced with the task of explaining the concept of coworking to an audience who had never encountered it before. Now, it’s thriving – we even named it as one of the best places to work remotely in Paris.

But the space has another particularity. They self-describe as ‘un espace feminin’ – a choice I assumed might open them up to a lot of controversy. Sandrine explains that this position does not represent an agenda, but was simply a natural extension of her own interests and experiences.

A story of French entrepreneurship

“I started to work in marketing at Fisher Price, then an international French tech consultancy and then I decided to be a mum-preneur – you know, [to] stop dealing with meetings at 8 o’clock at night,” she recalls in her gentle but clear voice, from the couch at Soleilles. Sandrine then started her own business, ‘Enfandise’, a website dedicated to kids’ quotes.

Through this work and her involvement with EPWN (the European Professional Women’s Network), an idea was sparked: to create a “place that was mainly for women.”

“I checked on the Internet and found a collaborative workplace in New York, which was named ‘In Good Company’, that’s only for women. And I worked with them to do the same in the France,” she explains.

“Although, since the beginning we did not want to make it only for women, because we thought it was too much [of a] niche, and not good for mixité. It’s created by five women entrepreneurs, but not only for women.” 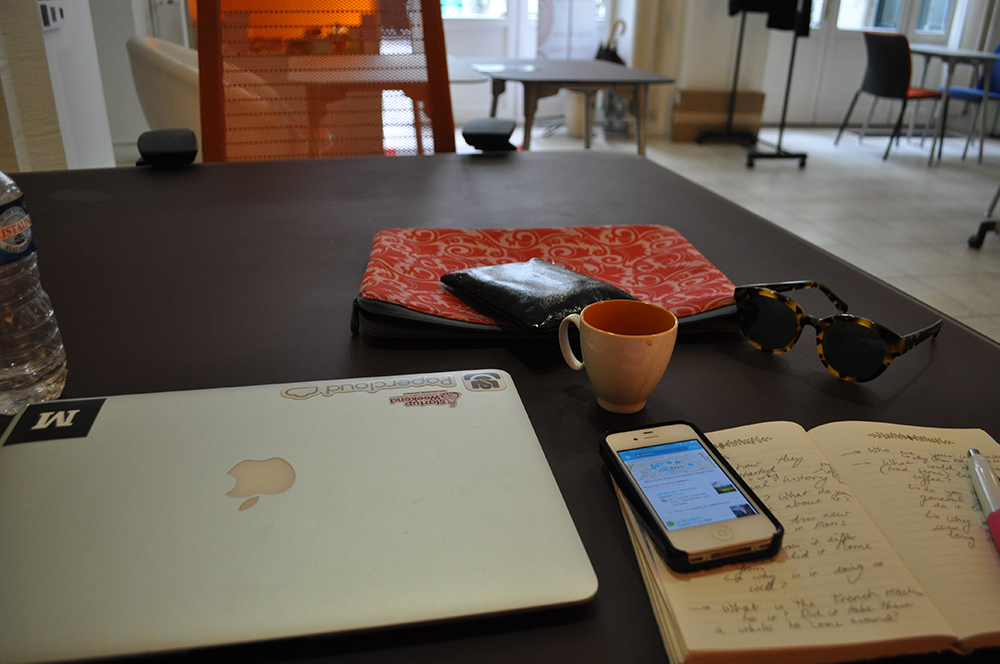 Is it difficult to be a (French) woman in tech?

When I pose the question of whether Sandrine considers it difficult to be a woman in the startup and tech worlds, she has no qualms in saying that it is. In her mind, it simply comes down to the fact that it’s relatively unchartered territory.

The key piece of the puzzle that’s missing, she explains, is role models: people to take these fields and achievements from groundbreaking to the everyday. Soleilles Cowork is currently hosting a photographic exhibition, Quelques Femmes du Numérique, showcasing the talents and achievements of women in the digital world. “The idea is to have role models; to show [women] that it’s visible and that it’s good, and that actually there are a lot of opportunities for women in these sectors,” Sandrine explains.

A supporter rather than a crusader in France

Despite being obviously passionate and well informed on the realities for professional women in business, Sandrine does not consider herself to be some kind of modern-day suffragette. She is merely a woman with experience, who enjoys supporting other women.

“I’m not a specialist – I don’t want to be a specialist… It was just because it was my surroundings; it was my experience,” she says of her choice to create a women-centric coworking space.

“After Fisher-Price, I’ve always wanted to work in a job that is meaningful; that makes sense – and I think this is something that now is more common, but has always been common with women,” she tells me. “Because when you work and have children, you want your work to be meaningful… Otherwise you’d prefer to stay with your kids.” 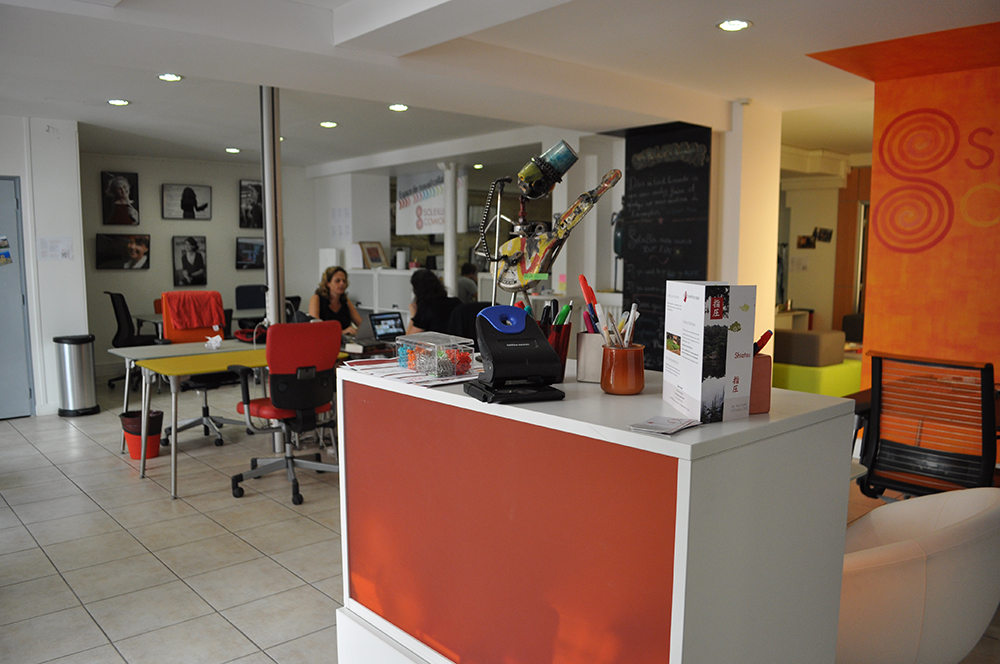 While the road is rocky for women setting out on this path, Sandrine explains that pragmatism is the best ally for a female entrepreneur. “If I had advice it would be, as a women entrepreneur… Focus on what you like to do… Get associates to do what you’re not good at; and do what men are good at doing – which, you know, is you create a company and look at how it will grow, and look at how you will one day not be part of this company… Be more at ease with the questions of money, of capital, of action.”

The rise of the remote worker – in France, and worldwide

Recent changes and upheavals have seen the need for a flexible and fulfilling working environment become a reality for more than just women with kids, however.“Now you have also a lot of men who are working as consultants,” Sandrine explains. “Sometimes, for example, we’ve met men working in the finance sector, who after a while – after 2008 – were obliged to think of creating their own company. And their wives were working full-time with children. So they had the problem of being at home with their young children.”

Coworking offers a flexible option for people like these – freelancers, consultants and entrepreneurs – who need to take their business out of their home and into a collaborative yet professional space. Residents choose Soleilles for many reasons: from location and cost, to their specialty in welcoming Anglophone companies. Or, it may be for the fact that the space has moved away from the ‘geek’ culture of coworking, and also hosts many female residents.

Although Soleilles aims to work with a feminine sensibility, they combine this with the smarts, diversity and experiences of a whole range of people: women and men; full-time and part-time workers; contractors, consultants, freelancers, startups and traditional businesses.

As Sandrine explains: “We welcome everybody [who] puts their mug in the washing machine – that’s the only criteria.”

Would you like to discover Soleilles Cowork for yourself? They are always happy to welcome guests for a day to try out the space. Visit their website to get in touch!

Where do you work when you’re in France? Have you tried coworking before? Share your likes (and dislikes) of the modern office environment below.

We love our partners!
This series was brought to life thanks to Nomador: be inspired and amazed by entrepreneurs, creatives and innovators in France.
Image credits:
1. Portrait of Sandrine, © Olivier Ezratty for ‘Quelques Femmes du Numerique‘.
All others © Hannah Duke.