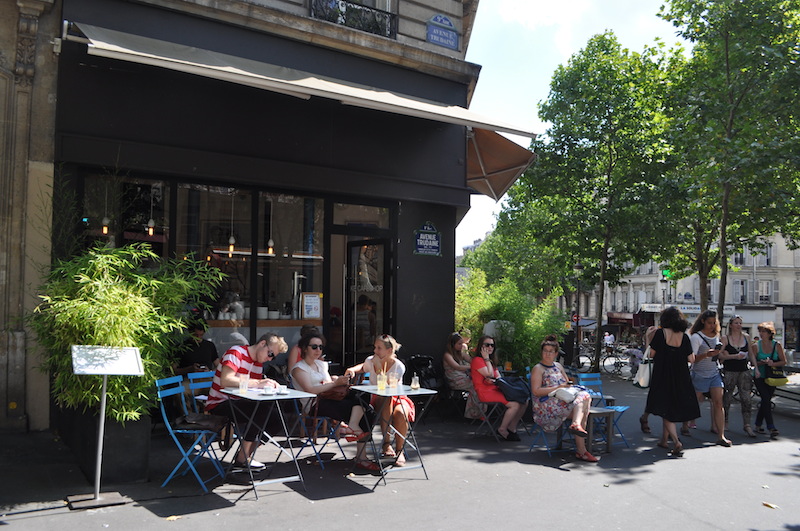 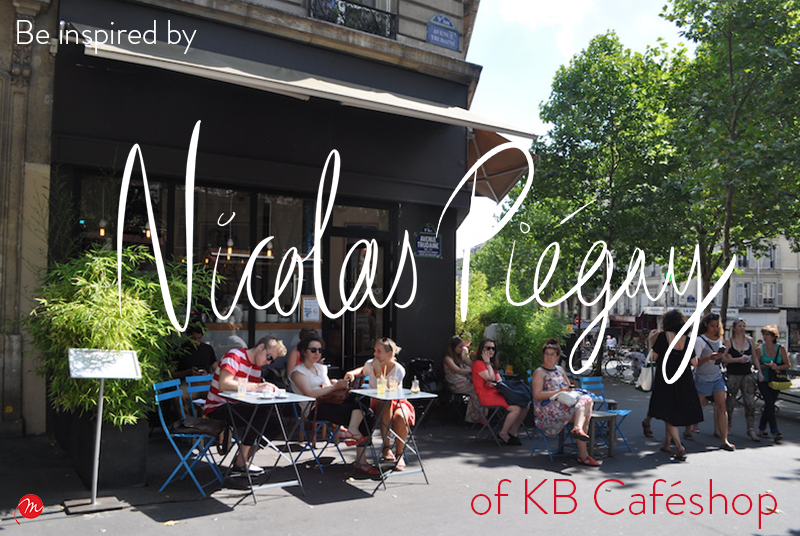 “I knew there were these people called baristas, but didn’t understand why they were special,” recalls Nicolas Piègay of his time in Australia. Coming from the owner of KB Caféshop, one of the most well-loved and successful new wave cafés in Paris, this statement might be a bit of a surprise.

“For most of my time in Sydney, I kept to the same habit – I’d have long blacks or espressos but didn’t like coffee with milk. I knew there were lattes but didn’t understand why it was important,” he continues.

It took time, but eventually Nicolas found his appreciation and awareness grow into something bigger than even he could have expected. The result is his bustling yet peaceful café on the corner of Avenue Trudaine and Rue des Martyrs in quartier Pigalle. 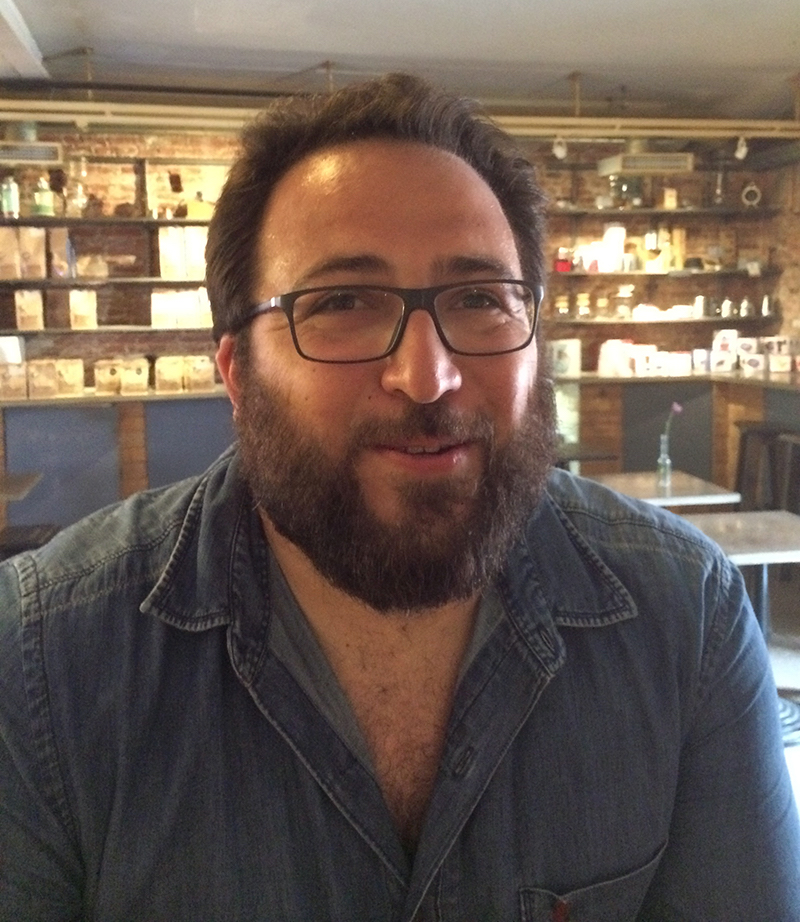 At first, Nicolas and his original French business partner had their eyes set on something more portable: they marvelled at the coffee carts in Sydney that would serve anywhere between 200 and 300 people during the morning rush. That people would wait in queues for their morning coffee was a new concept for Nicolas and his friend.

Whereas in Australia the process of gaining permission to set up a business on the pavement is relatively painless, in France it’s another affair. Faced with the impossibility of French bureaucracy, the pair turned to finding a real premises. The going was still tough, and eventually Nicolas and his business partner parted ways. Then, three months later, he found KB’s current premises, and six months after that, he was finally able to move in.

At first, it was only Nicolas, making coffees. But his team has grown, and includes people from all around the globe: Australia (“You’ll always have to have at least one Australian,” he jokes), France, Sweden, Brazil and beyond. One of his first team members included Australian Chris Nielsen, who helped open the hugely popular Ten Belles near the Canal Saint Martin, and now owns Fondation Café in the Marais.

Being one of the first cafés in Paris focused on a whole new kind of coffee culture was a challenge: the French weren’t yet familiar with the concept. Before KB (formerly known as Kooka Boora) opened in November 2010, it was just La Caféothèque on the scene. As Nicolas explains: “their focus was more on globally-sourced coffee”, rather than the quality and craftmanship.

Just a stone’s throw from the Moulin Rouge, and perhaps two stones’ throw from the Sacre-Coeur, it’s no doubt that the area is popular with tourists – but the location chosen by Nicolas is a quiet one. “Yes, it was daunting,” he says. “I didn’t know if it would work or if people would come.”

It seems his fears were unfounded: “People come from all over Paris to be here – and it’s the same with the other cafés.”

He’s right – the collection of new wave Parisian cafés are well tucked away: Fondation, Téléscope, Loustic…that’s part of their charm. Indeed, some of my more peaceful afternoons in Paris last summer weren’t spent in perfectly manicured gardens, or strolling along the banks of the Seine. They were spent sipping coffee that tasted like home; tucked beside leafy greenery on a rickety, bright blue, metal chair in front of KB; just inside the door of Fondation in the Marais; on the pavement in front of the Jardin du Temple at The Broken Arm.

The French new wave – of a different kind

Nicolas has watched this wave of café openings around the city with a mixture of excitement: “It’s great to know we were the first” – and caution: “I didn’t know if [the other cafés] would be competition – but actually, it has been great.” But most of all, it was market validation: not only was KB onto something, they were ahead of the curb.

I don’t think the French know what quality is anymore…they’ll go around the corner and have an apple tart for seven euros that was probably frozen.

But don’t mention the words “coffee revolution” – he hates the term. Why? “I think this is happening all around the world – not just in Paris. I think there’s a global revolution, and it’s just that it’s happening here a lot slower. First it happened in America, then Australia and England…”

While many would pass this off as the French demonstrating how strongly they hold onto their traditions, Nicolas isn’t as forgiving. “I don’t think the French know what quality is anymore,” he explains. “I mean they go to a restaurant and ask for the wine list, and then say ‘Oh let’s order a bottle of Bordeaux – that’s good’, and that’s all. In actual fact, they don’t know what they’re talking about. With wine, with coffee – even these new cool places… Young French people only go there because the guides tell them too. They don’t understand about the quality.”

I must admit I’m shocked – it seems he’s torn apart a myth that we’ve all been fed, propagated especially by the people it pertains to. Often in our minds, France is all about the finer things in life: about quality, produce, and terroir. In Nicolas’ opinion, it’s the new generations and styles of dining in other places in the world (the US, London, and Australia) that are actually appreciating quality for what it is.

Nicolas believes there’s some historical aspect to this conundrum. “There was a kind of revolution in the 60s and 70s – politically, socially, culturally – and suddenly you didn’t have to cook food all the time. You could just put something in the microwave and it was done. Women didn’t want to spend all their time cooking if they didn’t have to anymore.”

The French then began to base dining more on convenience and price – and yet they still have little understanding for value. “We’ll have people come here and complain about paying four euros for organic, well-made banana bread,” says Nicolas. “But then they’ll go around the corner and have an apple tart for seven euros that was probably frozen.”

Fresh, simple and delicious: isn’t that what French food should be?

Simple, great quality food made from locally sourced, fresh produce is just as important for the café as a good cup of coffee. KB’s resident culinary genius is Julie: a timid and delightful young French woman, who makes the most delicious tart I’ve ever tasted (pistachio and peach to be precise). Honnêtement, I could spend hours evangelising over the experience of eating that tart.

If the true value of a tart like this could be lost on the French, something must be wrong. In Nicolas’ mind, there’s a misunderstanding of what quality and value are – and for a culture and nation steeped in the idea of appreciating the finer things in life, it’s strange to see such a disconnection. 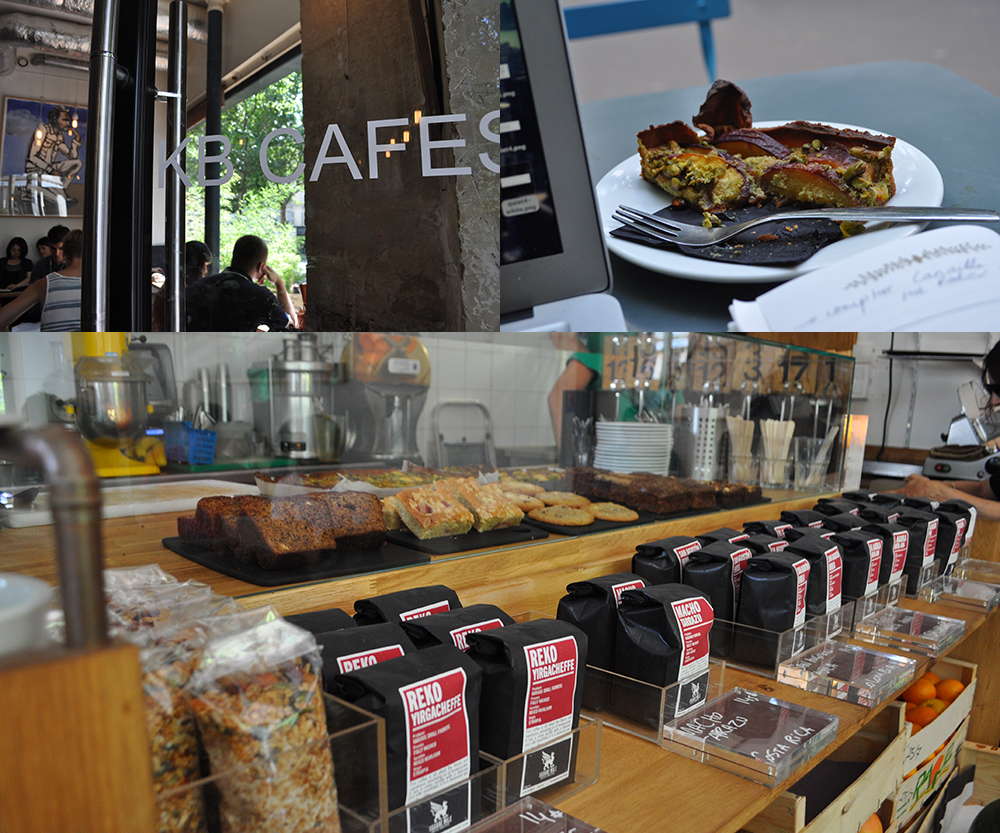 “Slowly other cafes in Paris are realising that something is happening, but they don’t realise what it is,” Nicolas explains. “However things have changed over the last few years: for example we’ve gone from Arabica to single origin beans.” He is hopeful that eventually, change will occur.

When I ask if cafés like his – and the other neo-bistros and restos popping up in alarming frequency – could mean a loss of all the things we love about France, he concedes that it is a possibility. But again, in his mind, what is truly French has disappeared. He believes the best way forward is to “preserve the good things, and build on them.”

Qu’en pensez-vous? Are the French things we love about France now a ruse? Will they disappear with time? Share your thoughts in the comments below.