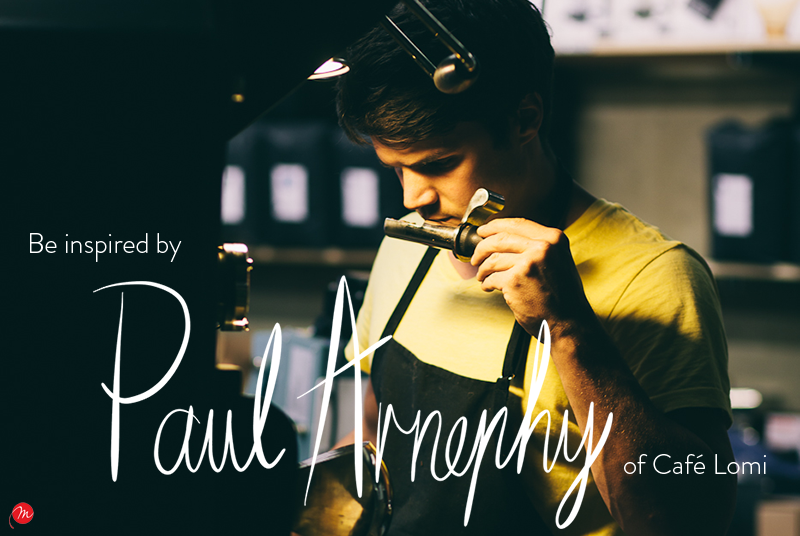 At MyFrenchLife™, we often wonder what makes for the most successful recipe when it comes to expats in France. Who succeeds, and who doesn’t?

Some take the traditional route of finding a job and getting a visa, driven by a desire to stay in a country they’ve completely fallen for. Many others come here as if by chance, simply driven by the unfolding path of life.

It seems that where expat entrepreneurs are concerned – especially those working in coffee – the latter is the more common course. These aren’t people who romanticised Paris, or indeed who even knew much about France and the French before arriving.

Paul Arnephy, co-founder of Lomi Roastery and Café, is one such coffee entrepreneur. The reason he moved to Paris is rather simple, as he explains to me: “It actually happened because I met a French girl over in Australia. We lived over there for a couple of years together, then moved over here. So five years ago. It was basically – we break up or move to France, so we moved to France.”

Unlike many who imagine their vie à Paris as a dream come true, expats like Paul have arrived with no expectations. Herein lies the secret to success, perhaps…

From Melbourne to Paris via coffee

After working at DiBella Roastery in Melbourne, Paul knew he wanted to work in coffee in Paris. But for him, the coffee culture in Paris was a very rude awakening.

Paul recounts the story to me in his expansive Australian accent, from a leather couch at Lomi. The café is eerily empty; closed up for summer. He’s made me a cup of filter coffee from a light, floral and “easy going” Ethiopian grind.

“I did a little bit of searching on the Internet, and discovered that tourists didn’t like coffee in Paris, which is normal because it’s not their culture,” he explains. “My first coffee here is the one that really scared me. The guy made a coffee for someone before me – so he put coffee in, didn’t tamp… And then when I ordered my coffee, all he did was push the button again, so he ran water through the [same coffee] – and that’s when I knew there was something wrong going on.”

Paul is completely lacking in pretence, which makes him comfortable to be around. But it’s clear he’s uneasy talking about himself; he is reticent to share details, perhaps wondering how much I really want to know, and why I’m even interested. He relaxes slowly into the rhythm of our conversation, eventually allowing himself the chance to talk on when we reach a topic he’s particularly fond of.

“My first job in France was as a barista at Alto café – it’s a red truck outside Galeries Lafayette,” he tells me, slowly at first. “I saw they had a really nice coffee machine, and a nice grinder, and as a barista I thought, well cool that’s the only place I’ve seen so far with decent equipment.”

Eventually, Aleaume Paturle, co-owner of Alto, sold his half of the business and became a partner with Paul in a new venture: Lomi Roastery. “We started Lomi together four and a half to five years ago. So I was super, super lucky that this place existed and that he and I both had the same desire to do wholesale roasting.”

Wholesale Roasting, as it happens, is a very different world to setting up a café and appealing to coffee-drinkers. When you’re targeting businesses themselves, people who are already self-proclaimed experts in coffee, the going gets harder.

“Of course we made a lot of mistakes in our approach, I guess, but it’s very hard because it takes an investment from A to Z,” Paul tells me, more readily now. If any part of the coffee process – from roasting to grinding to cleaning the machine – is done incorrectly, the end result won’t be spot on.

“At the start there was a lot of resistance about doing simple things, like something as simple as cleaning out the water filter between each coffee. It’s met with a lot resistance: ‘I don’t have a lot of time, c’est pas possible’,” Paul imitates in Australian French.

“Our first customer at the roasters was Le Bal Café, which is a café in the 18th. But I mean it was slow going at the start – it really was. It was us looking for people and then convincing, as opposed to people looking for good coffee… I guess the last few years it’s changed: now people are looking for a good coffee and supplier or roaster.”

Think French to convince the French

The secret to convincing the French? “You just have to make them taste,” says Paul. “The guy who wants to serve his customers a nice glass of wine or a nice steak understands straight away why one coffee tastes better than another one. And it’s not an argument, he’s not skeptical – he understands the coffee has to be grown well, processed well, roasted well.”

It’s quite hard to get things done [in France] – things take time… simple things, like paperwork or bank stuff.

Just as the French can be slow starters when it comes to getting into new things, Paul said the journey of settling into the French life, language and culture was a challenge for him. But unlike the French, he took the challenge head on.

“The language was a challenge, for sure,” he says. “It’s cool because my first six months working at Alto, I was in a heavy tourist area. So half the customers were English speaking, and half were French speaking, so I could slowly get into French – I wasn’t thrown in the deep-end.”

“And then after that, it’s just the French attitude – it’s a plus and a minus,” he explains. “It’s quite hard to get things done – things take time… Simple things, like paperwork or bank stuff.”

Perhaps then, the key to success in France is a careful balance between many different things. It’s knowing when to go with the flow, when to turn a blind eye to certain French habits, and when to challenge them. While the coffee culture might be a habit in need of changing, Paul understands that the French attitude is not. “I didn’t understand the French people, the way they were talking to each other; their attitude – it took me years and years to understand.”

He then slips quickly into self-deprecation with a broad but coy smile: “And now I don’t understand still but I pretend a little bit that I do.”

Are you an expat, entrepreneur or traveller in Paris? What have been your experiences with getting to know the French? Share your stories in the comments below.

We love our partners!
This series was brought to life thanks to Nomador: be inspired and amazed by entrepreneurs, creatives and innovators in France.
All images © Gonçalo Silva, except bottom left © Hannah Duke.