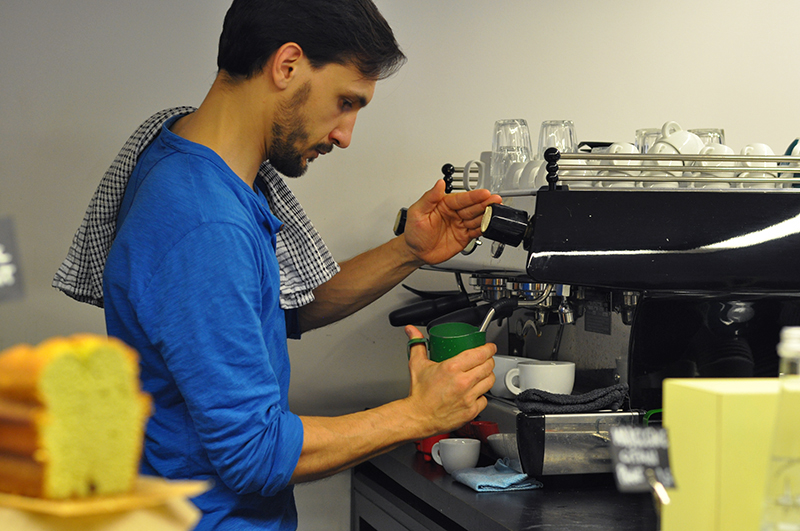 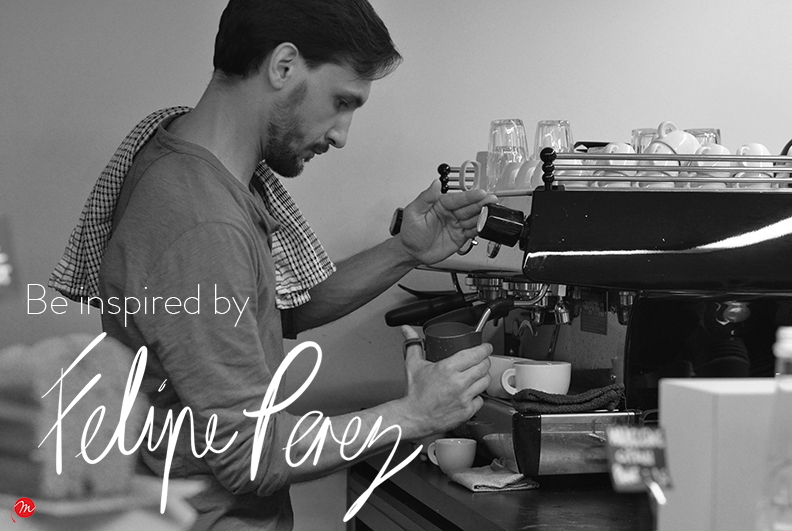 When it comes to his job, Felipe Perez is quiet, focused and effective. He can run a café single-handedly as customers stream in and out the door non-stop, still pour a perfect flat white, and not for a moment lose his cool.

His manner is unassuming, but as I am to discover, there’s much more to him than meets the eye. The first thing even many Craft regulars may not know about him is that he professionally trained and worked as a patissier – for ten years, no less.

But details like this don’t come readily at first. When we finally sit down for a coffee and chat, he is much more comfortable telling me the story of Craft. It’s one he knows well, and has no doubt told many times.

It’s almost three years since the café opened, inspired by the vibrant cafe scene and remote working culture in New York. Founder Augustin Blanchard was looking for a way to translate this culture across the Atlantic. The space was then created with five of his friends as part of ‘Opération Vital Quartier’.

The café has been featured on countless websites, and in magazines and newspapers. Yatzer calls it the “evolution of café culture for a modern age” and focuses heavily on the café’s design – a result of collaboration between Blanchard and the design studio POOL.

Timeout recommends the red fruit crumble, Vogue has named it as one of their top brunches in Paris, while Dezeen opens with this gem: “Freelance writers and journalists can work for as long as they want without being pestered by wait staff.” 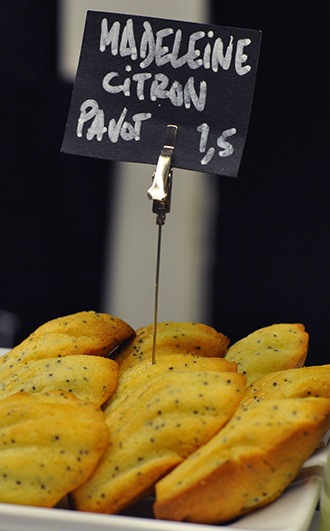 Going behind the counter at Craft

When our conversation steers from Craft’s story to his own, he gives a small smile and shifts slightly in his seat: now the discussion is off-script. “I joined the adventure at Craft almost a year ago,” he begins. “I’d always been following the project since it’s origin – as an occasional customer and curieux.”

But how did he become a patissier? “I took time to find my path,” he explains after a few moments of uncertainty, not knowing how to begin his story. “I started studying design, and I liked that but… For me it was a little frustrating.”

He stopped his studies in design, and somewhere along the way discovered pastry. Felipe says that it was the combination of a technical base with the huge scope for creativity that really attracted him to it. “That’s what interests me,” he says, “And the taste, of course. Because I love to eat; at my house we always eat well.”

“So, I trained, passed my diplôme, worked in les belles maisons à Paris – in patisseries, in hotels, in Paris and in Lyon.”

After ten years of working in the creation side of patisserie, Felipe says he was ready for a new challenge. He then made the switch from baking to service and then management. “I really like contact with the customers; the multitasking – doing lots of different things all the time,” he says.

Craft your own adventure

He was working as a store manager when he was approached by Blanchard to collaborate on his project. Now he’s charged with the task of finding a path for Craft: where will it go next, and what will it become? Regulars will be pleased to hear that this may involve a new Craft outpost in Paris…

At the moment, Craft is focusing on making the coffee experience something special for their customers. Felipe has been working with Paul Arnephy of Lomi to create a special house espresso: “We choose this wonderful new coffee from Salvador (Finca El Recuerdo). It’s a micro lot from the last harvest that will be served at Craft and only there – world exclusive.”

It’s very interesting for me because the service is not always the same, because the customer is so different…

Felipe enjoys the variety of his routine; the diversity of customers. “You have a few customers who come every day, having their coffee at the bar – they stay a few minutes and go.”

“Then we have the freelancers who need the space to work, and come once in a week because they change their routine. Or you have the businessman travelling in Paris, looking for a spot to work – he found us, and he will stay here every day doing all his [work] for two weeks.”

“It’s very interesting for me because the service is not always the same, because the customer is so different that you have to change your service.”

“Yes, it’s chall-en-ging,” he articulates each syllable in English before dropping into French once more: “There’s no routine. And that’s really great – I like it a lot.”

One new challenge awaiting Felipe at Craft was to become a master barista. He took lessons in coffee with Paul Arnephy at CafLomi (Craft uses the Parisian roaster blend), of whom he speaks very highly. We did a few lessons together, for the basics… And then you have to practice; you have to love the product – and thats it. If you love that, you will learn fast, I think.

It was in Lyon four years ago when Felipe discovered “le bon café”, at La Boite à Café” – the café created by artisanal roasters, Café Mokxa. A trip to New York cemented the interest. “I told myself, really, there are so many things to do in coffee. And me, who adores food, who has this background de patissier et de restoration – there are so many ways you could combine the two.”

As with la patisserie, Felipe loves the logic and process that produces an incredible result: each minute change can alter the final product completely. “You can say coffee is coffee – no. Coffee is not always the same, and if you change the temperature, if you change the grind, even the atmosphere – with the weather; it changes everything. The fact that it’s alive; because it’s changing with time – I like that.”

The traditional French coffee culture stands in the way of this appreciation. “In France, traditionally, it’s the petit noir au comptoir: an espresso in ten seconds… Or a cup of coffee after a meal, or a coffee with milk in the morning,” he explains. “There’s no real culture when it comes to la service du café… The quality; the origin of the coffee.” 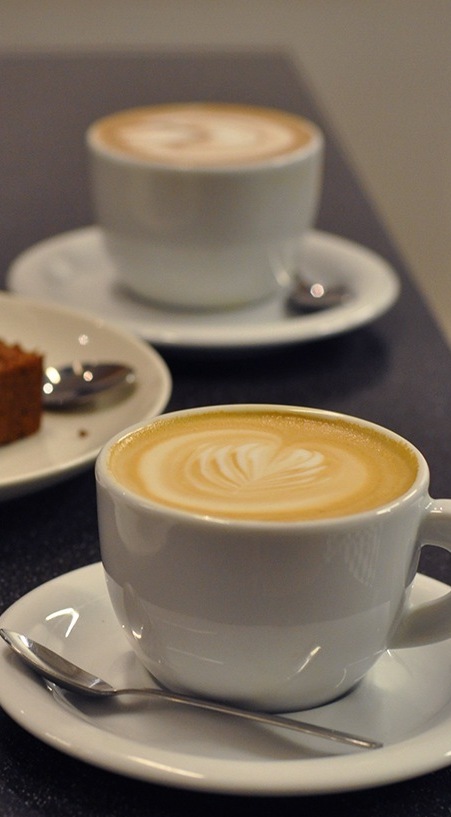 “But, simply because of travel, the French are developing an opinion around coffee. What’s interesting is that, although the French are about three years behind in coffee, with la patrimoine gastronomique, and le bon gout à la française – and their pretention in all these things,” he says with a glint in his eye, “I think that, as a result, there are a few people – artisans who work with coffee – leading this [movement], albeit much later [than elsewhere].”

Staying true to your passions

When Felipe first came to Craft, he was working the mornings in the kitchen, and afternoons out in the café – “You can’t do that everyday,” he laughs. “Now I have somebody in the kitchen who helps me, but we’re working together and that’s cool.” Now, he has one foot in several worlds at once: management, business development, service, coffee, food…

“We’re trying to do simple things here at Craft, but good things, with a bit of a funky touch. Now we have, for example, a basil and apricot cake – it’s really, really nice. This is my recipe,” he says. I dutifully order a piece later and am not disappointed: a green cake is not what one expects, but the taste that lies waiting is reward for my trust.

While it might be trite to draw metaphors between a cake and its baker, Felipe is much like his creation: a quiet and unobtrusive demeanour is simply a disguise for the flavour that lies beneath – fresh, unexpected and endearing.

Where is your favourite place to have coffee in paris? Have you tried Craft cafe?