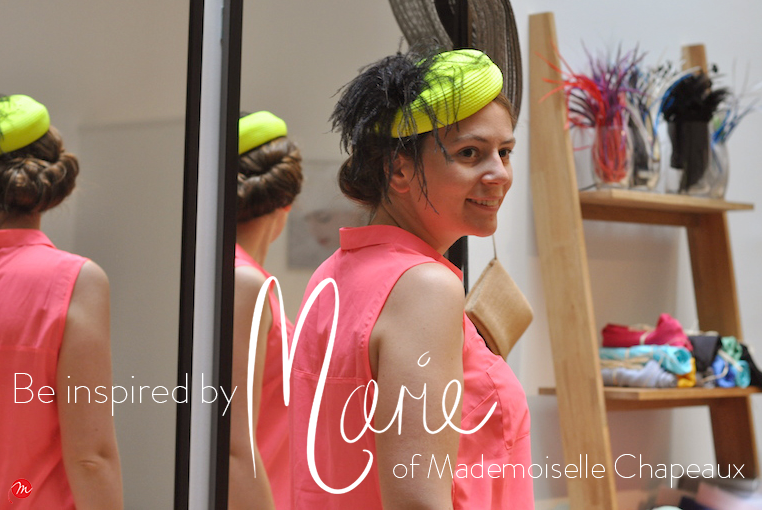 La vie d’entrepreneuse is a busy one for Marie Van Haecke. She is taking me on a tour of Mademoiselle Chapeaux, the milliner’s atelier in Paris where she works. The phone interrupts our discussion countless times; customers arrive; hats need to be repaired.

She takes each in her stride, never dropping pace for a second. As we talk about her work, she makes many poignant and serious observations, but at the end of each, her face breaks into a wide, bright smile, echoed by a trickle of infectious laughter. She is one of the most good-natured and lively French women I’ve ever met.

Marie has been an entrepreneuse et modiste for many years now. Last year, she decided to join the team at Mademoiselle Chapeaux, to use her experience to help grow someone else’s business. With the atelier’s two founders, Chloé and Anne, on maternity leave and working full-time (respectively), Marie is charged with business development, marketing and communications – but also hat design and decoration. She is the living definition of versatility. 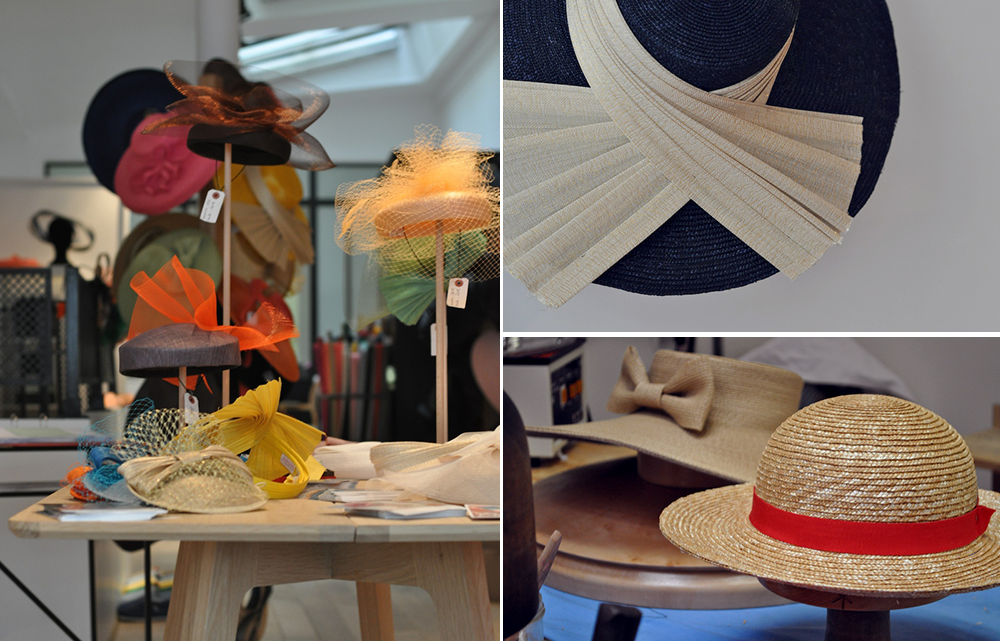 Inside a French artisan atelier

Founders Chloé and Anne started small: they built a successful business renting hats for special occasions. They now sell made-to-measure hats from their Marais atelier, and the team has grown to five: as well as Marie, there is Isabelle, la modiste, and Sophie, who works in the boutique and organises the hire of hats.

Marie walks me through the atelier: an open, light space – and quite a large one for Paris. The back room is their office; full of stationery, sticky notes, Apple computers and newly-arrived products.

The next room toward the front door is the atelier, where hats are shaped, sewn and moulded by artisan team member Isabelle. Marie shows me the delicate strands of straw and silk that Isabelle turns and shapes by hand into perfect spirals; a beautifully detailed snail’s shell. “With the pressure of her fingers, and the way she turns it, she gives form to the hat,” Marie explains en français, imitating these motions with a strand of paille.

This is then reinforced by a stitching machine and placed on a mould, which shapes the coil to become un chapeau. Next a special iron is applied to the brim, as well as a petit fil around the edge to hold everything in place.

The whole process is intricate and time-consuming: beauty built on a small scale; the work of a true artisan. After various encounters with artisans, I’ve come to the conclusion that the greatest skill required for l’artisanat is patience, and this patience only comes from being passionate enough to make time for it.

After showing me Isabelle’s tools and materials, Marie moves onto her part in the creation process: placing decorations onto hat bases, dreaming up headbands of flowers. Anything she imagines, she creates.

She designs these to fit the needs of clients attending special occasions, or designs simply to make something beautiful. Marie presents me with a number of classic, yet modern designs, which of course turns into both of us trying on hats – because, well, pourquoi pas ?

And yet, designing hats is not Marie’s only talent: as she explains to me, she is a vraie “autodidacte” – she has taught herself much of what she knows.

She tells me her story as she repairs a hat, deftly stitching while chatting. “At the start, I was a graphic designer – I studied visual communications. I worked in a design agency, in packaging. 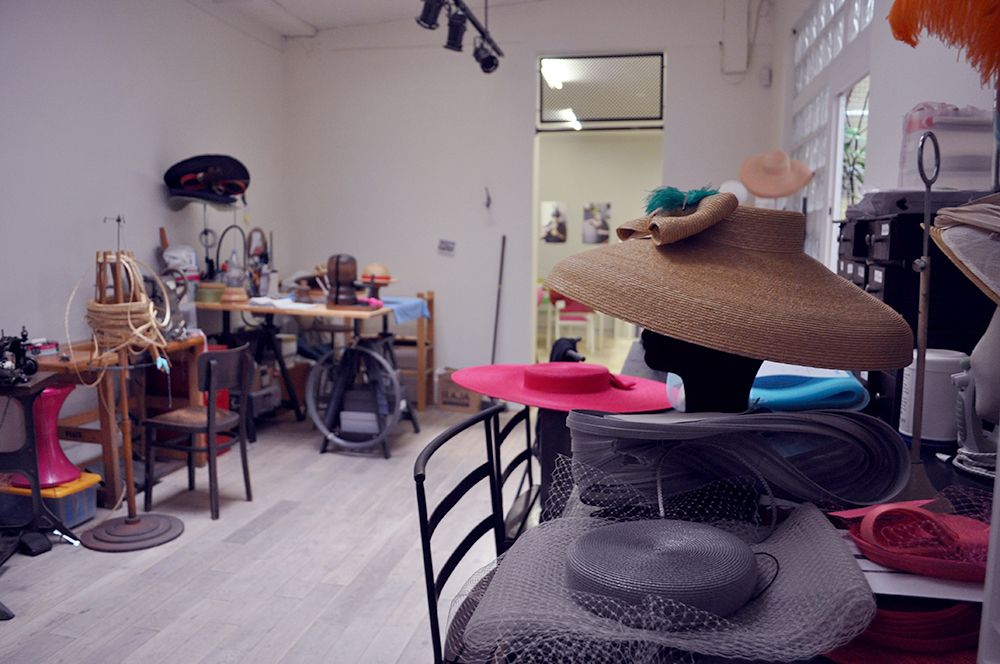 In fact, I’ve always been creating – I’ve done so many things, ever since I was young,” she says. She started off creating handbags, then moved into hats, and is now working on her own clothing line.

Where does all this creativity come from? “Je ne sais pas,” she tells me, and then in her most mysterious voice, with a coy smile: “C’est un mystère… C’est la magi de la création.”

A French entrepreneur at heart

Above all, Marie thinks of herself as an entrepreneuse. As she explains, “I’m not 100% an artisan. Mademoiselle Chapeaux is a startup that is built with artisanry at it’s base.”

“I think of myself more as an entrepreneur in the artisanal world. I love working on the web, and in communications… A small part of what I do each week involves artisanry, but the rest of the week is more development, communication: business.”

Marie has instilled this passion into much of what she does for Mademoiselle Chapeaux, transforming it from a traditional atelier into one that is up-to-date stride with modern technology and marketing developments.

“There are a lot of modistes à Paris; who work from their own homes, who don’t produce beautiful photos [of their work]… Their hats are great, but their website isn’t… So what I’ve done, by myself and now with Mademoiselle Chapeaux, is to develop a real brand image. Et 100% made in France.”

A focus on ‘Made in France’ is very important for their business: they work only with other ateliers and distributors in France. “Hats are a real artisanat, and one that is really starting to disappear in France,” Marie tells me. “So, we really want to garder the savoir-faire. And la culture de la paille, is also very much a savoir-faire français.”

Although mass-production of straw hats happens in places like China, Marie says the quality and beauty isn’t there – and of course, nor is the respect for what is truly artisanal in millinery. “So, it’s really important for us to have real quality amongst artisanats,” she continues.

Whilst many artisans are struggling to make ends meet, to bring their creations into the 20th century; others are reinventing the way artisanry is traditionally done in France. And although she doesn’t completely count herself as an artisan, Marie is certainly part of this movement.

Her willingness to pursue a path she chooses, and passion to push beyond her own boundaries is inspiring. A true entrepreneur, she is overflowing with ideas for new projects – and of course, like a true entrepreneur, believes each will not only come to fruition, but thrive and become something even more incredible than she originally imagined.

Et vous?  Where would you wear an artistic French hat? Share your fashion tips in the comments below!