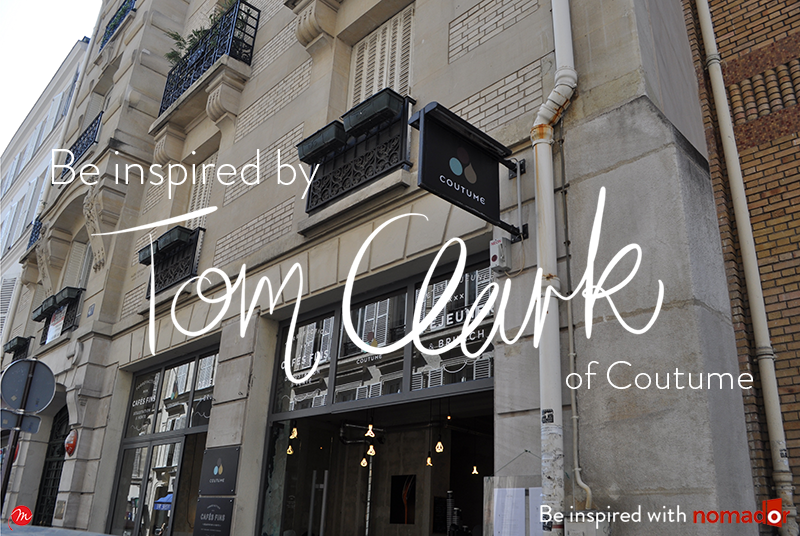 Paris is a city that never ceases to amaze us. We love that it clings to tradition; to heritage, patrimoine, and beauty – not to mention many of the clichés we’ve come to love despite ourselves… But we also love its ability to become something entirely new at the same time.
Many expats, particularly those with an entrepreneurial or creative spirit, have made Paris their home for this reason. With the help of our partner, Nomador, we’ve been seeking out the stories of these people with the aim to inspire – but also to show a different face of France!
As an online, peer-to-peer website for house-sitters and home-owners, Nomador understands the ups and downs – and huge rewards – of stepping out to do something different. Tom Clark, co-founder of Coutume, has been challenging the status quo of coffee in Paris for many years now. We were intrigued to hear his story – and how he’d managed to convince one of the most ‘French’ neighbourhoods in Paris that they weren’t getting the most out of their café du jour… 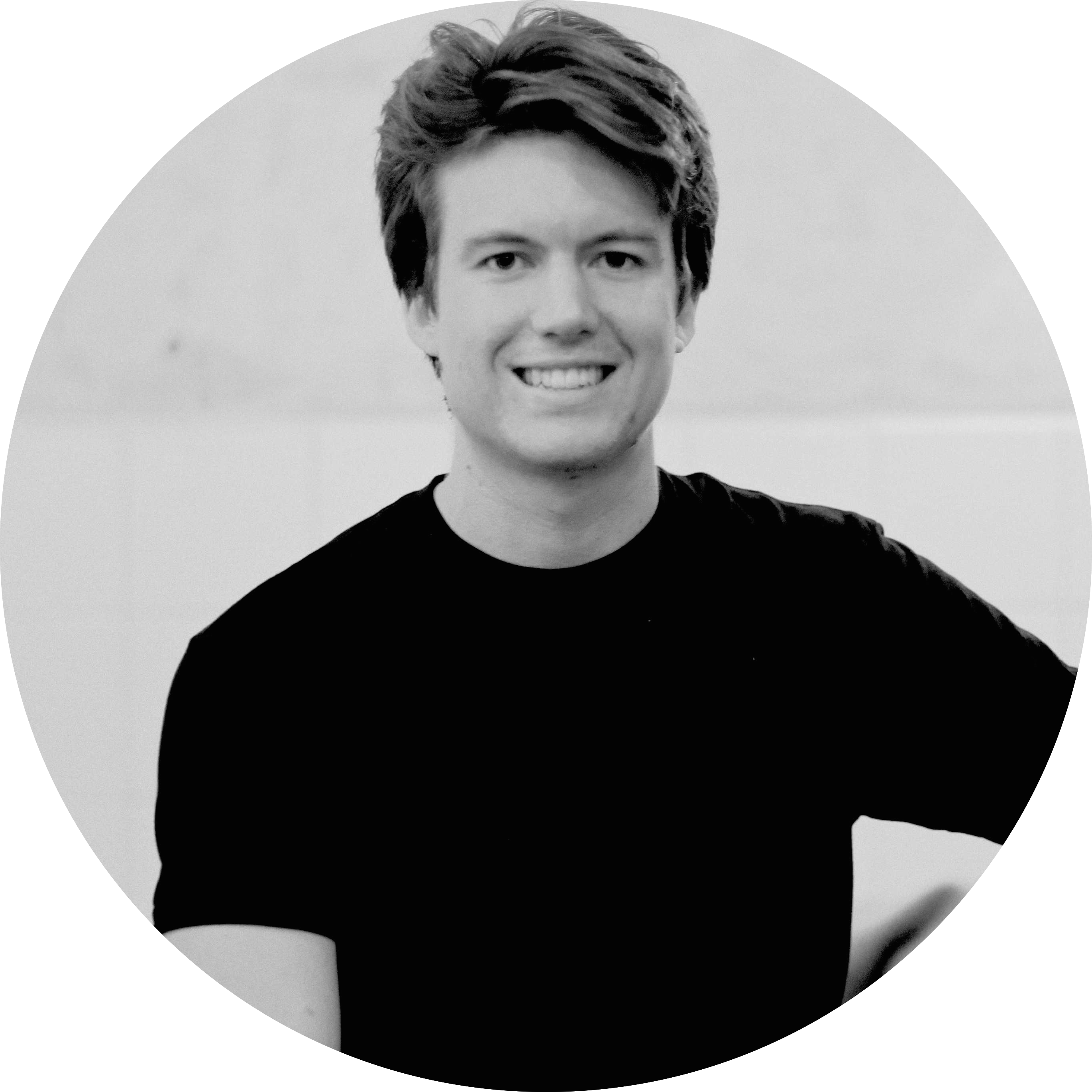 The first time I met Tom Clark, it was entirely by accident. I’d just jumped off a Vélib on a very warm day, and, sporting a sheen of sweat, I sauntered into Coutume Instituutti for a flat white. Admittedly, this is not how I prefer to meet people whose work I admire.

As I ordered, a tall man in a black t-shirt mused aloud on what the French translation for ‘flat white’ would be: “un grand plat?” he suggested with a quizzical look. I immediately knew he was Australian – and not simply for the pointedly restrained, neutral accent, and his dry humour.

Rather, it was the one thing that I think contributes to the stereotype of Australians as the universally liked nationality: we’re so unassuming, that we don’t think not to talk to strangers. With the French, this would be an unthinkable invasion of privacy. But we’ll happily share ten minutes of banter with someone we’ve never met, for no reason other than they are there.

Oui, the ‘easygoing Aussie’ is a cliché, but much like the brusque, blunt French person, it’s also somewhat true. The only difference is that the results of this Australian cliché are generally positive, while for the French it is almost always negatively misconstrued (more on that here).

On Antipodean and French temperaments

If this was the first thing I noticed about Tom, the second was that he is curiously levelheaded. When I arrive at Café Coutume’s original outpost in the 7th arrondissement for our arranged meeting, he’s running late due to motorcycle issues. And although he seems a little flustered, to the untrained eye it would barely be visible. He is patient, and doesn’t rush our chat for a minute.

Australians are terrible at claiming everything in the world that’s good, as Australian.

I’ve been wondering why, in particular, there are so many Australian café owners in Paris. Yes, Australia does have a thriving coffee culture, to the point that we’re all horrible snobs about it (myself included). As Tom says to me near the end of our chat with a wry smile: “Australians are terrible at claiming everything in the world that’s good, as Australian.” 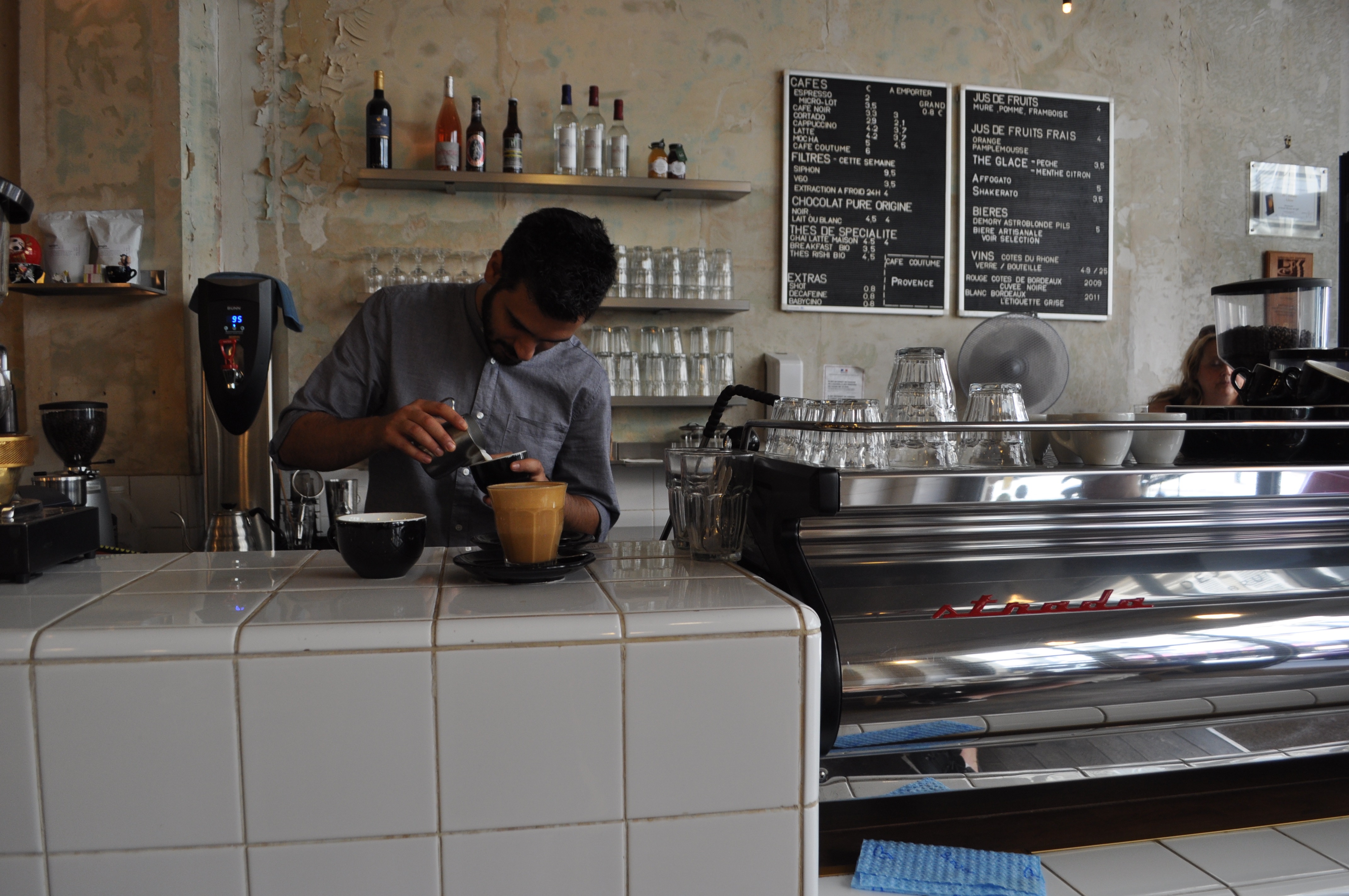 “We have a little bit of an influence, for sure, because we do have a great food and beverage industry,” he concedes. But, as our conversation highlights, being Australian really has very little to do with it. In fact, when it comes to running a successful café in Paris, Tom says it’s important to leave Australia out of the equation.

Blending well with the French

“My original idea was a coffee cart, called ‘La Vague Australienne’,” he begins. “I was going to have a cart designed with like a surfboard as the countertop.”

By the time he’d embarked on the journey to create Coutume with business partner Antoine Netien, however, he “understood that really to have a big impact we had to be French.”

To truly become a French business rather than an Australian export, the pair made the deliberate choice to set up shop on rue de Babylone: “we wanted to grow within the French fabric – and rue Babylone is very French.”

Back in 2011, it was no mean feat introducing the very new concept of coffee culture to the French – many of whom assumed they had coffee down pat. “We had a nice little clientele, that was supportive from day one,” Tom recalls.

“But we also had a lot of new neighbours and new residents who would say, you know, ‘what are you doing here? Why don’t you speak French? What’s wrong with the walls?’–” he gestures to the fashionably peeling paint on the walls – “‘Paint them!’”

“They drank espresso – at least they thought they did – and then when we brought them out one with the proper extraction parametres, the proper volume, body, consistency, flavour, aftertaste – that was all a little bit too much for a couple of regulars… So it took a while, but we worked out how to do it.”

Their method was first to make a comparison with Italian espresso – a concept their customers would be more familiar with. “We even proposed to start off with, that we’d bring a little pot of hot water and if it was too strong they could lengthen it themselves,” he explains. “But we wanted to feature our universe in a proper way, so we thought, well, we’ll bring it out how we want to bring it out, and let them discover it from there – or if it’s too much for them to begin with, they can at least adapt it to their tastes. And then little by little, the pots of water were just removed from the tables.”

When I ask if he thinks that this overtaking of the coffee culture in Paris stands to threaten all that is traditionally French, his response is reasoned, yet definite. “I think it’s just a matter of respecting the French art de vivre,” he begins. “The French culture – the food culture – is based around being perfectly replicating service, food transformation and ambience. It’s all about being perfect in every aspect.”

In a culture so obsessed with ‘the best’, coffee has been, in Tom’s words: “a complete hoax.” Tom first discovered this upon arriving in Paris as an exchange student many years ago. “I had a great year, and discovered all the amazing food, wine, cheese – all the good stuff; all the beautiful landscapes and the history, but [I] also discovered how terrible coffee was.”

“I began thinking: ‘Is this just a cultural thing; is this what they enjoy drinking? Is coffee a subjective thing?’” 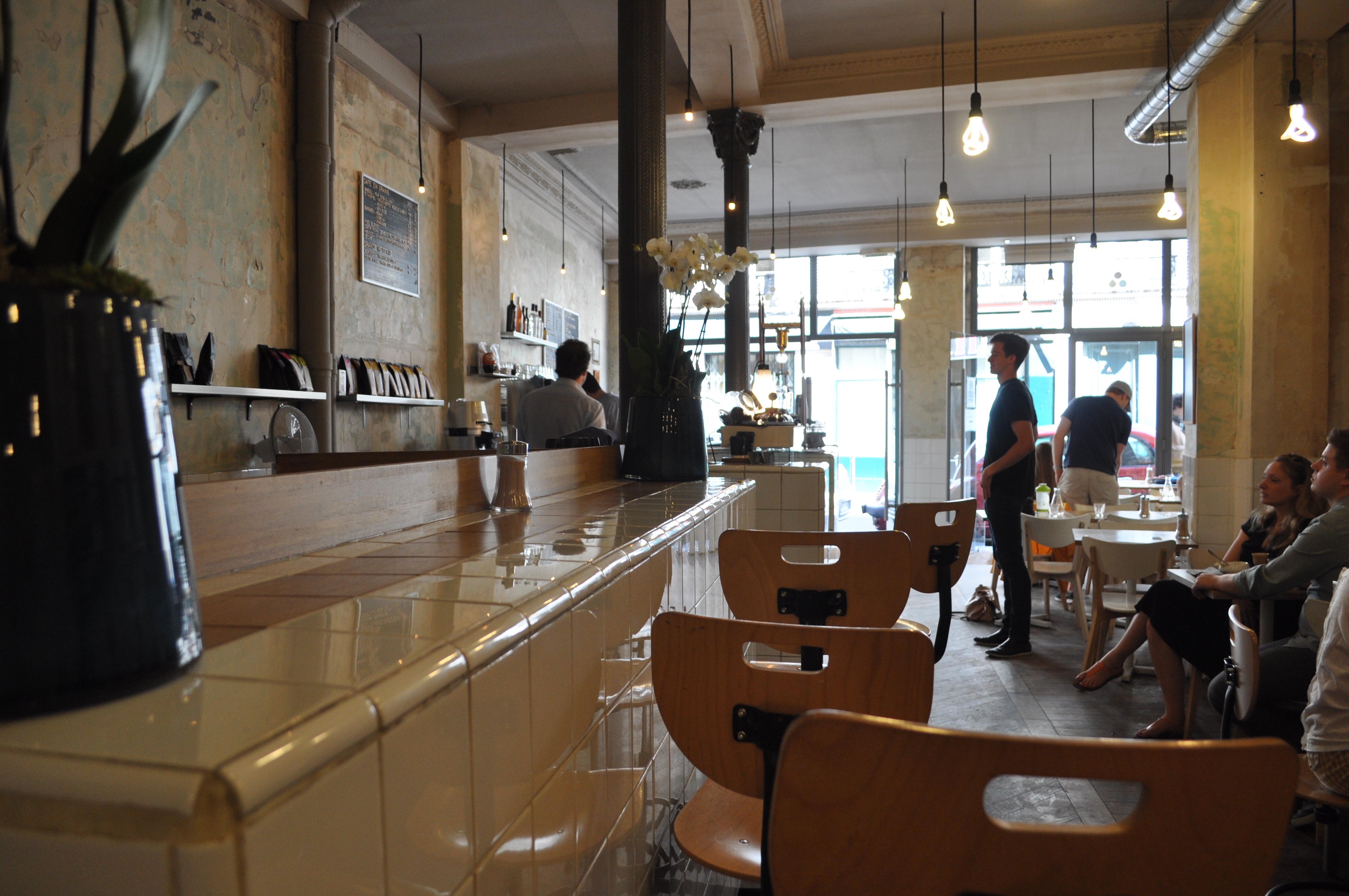 Tom began to watch – and ask questions. He queried barmen on why they didn’t tamp the coffee; saw that the beans were stale and pre-ground.

I mean, the French love terroir: they like to know where it’s come from, how it’s farmed and all that sort of thing,

“Little by little, just by talking to barmen in an inquisitive manner, I really discovered they had no idea what they were doing: there was no knowledge based in the work going on behind the bar,” he says.

The preamble to French coffee success

When Tom came back to France for the second time in 2008 (for love, no less), he knew he’d need a project to work on. Coffee appeared to be the perfect challenge. When his original idea for La Vague Australienne didn’t go to plan, due to the nightmare that is French bureaucracy, he became the Paris distributor for a roaster in the Czech Republic, who he’d met on his travels throughout Europe.

“[At first it] was door-knocking and doing forced coffee tastings, and carrying a coffee grinder on my back, and a little brewer somewhere to make coffee for chefs, and extractors – you name it,” Tom recalls. “So I was pretty active for about a year, and I had some success – very small, but I had 20 or 30 clients buying from me.”

He began to realise that in fact, the market was there. “I mean, the French love terroir: they like to know where it’s come from, how it’s farmed and all that sort of thing,” he explains. “The more I got into it, the more I saw there was a real opportunity, but it had to be done locally. The whole distribution thing as a business model didn’t really work.” 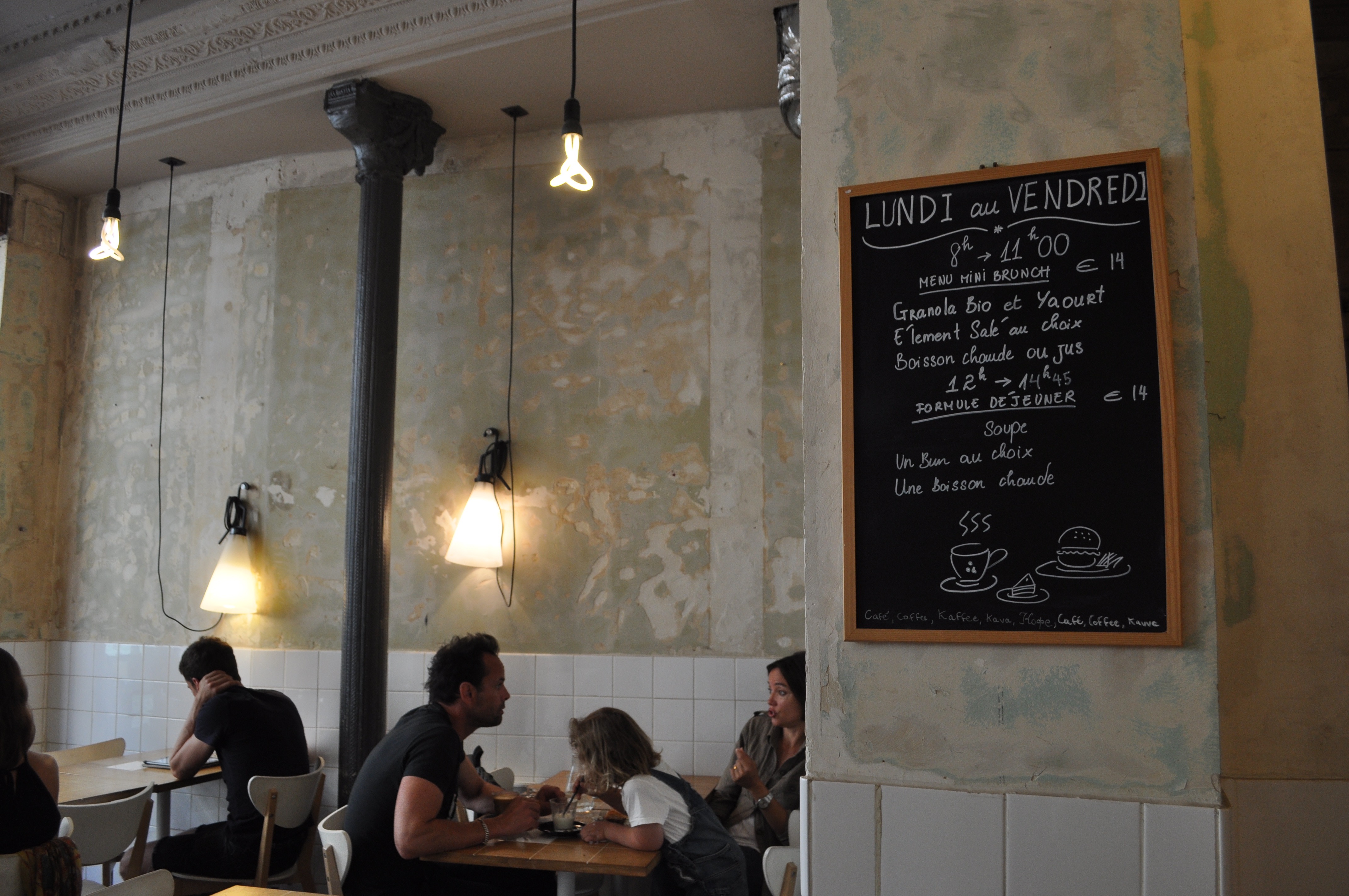 By this time, Tom had met business partner Antoine. “He’d spent five years in Melbourne roasting and basically being immersed in the coffee culture,” he tells me. “He came back in 2009 with the idea of bringing that future back to Paris; to his homeland, and tweaking it obviously to fit in with the French culture.”

And herein lies the secret to success – and Tom’s argument against those who say this new coffee culture is the enemy of true French dining and coffee culture. “I think [good coffee] belongs in the French food and wine culture, because they have this palette; they have this curiosity; they have this sort of level of food intelligence, and they deserve to have somebody who knows what they’re making their coffee and bringing them out real expressions of a terroir.”

“So, I think that’s a completely positive thing.”

What do you think of the ‘new wave’ cafes and restaurants? Are you for or against shaking up the dining culture in Paris? Share your start-up experience in the comments below.

We love our partners!
This series was brought to life thanks to Nomador: be inspired and amazed by entrepreneurs, creatives and innovators in France.
Images © Hannah Duke